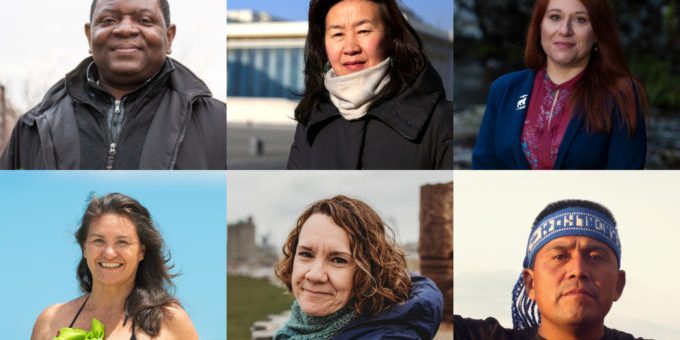 Awarded annually to environmental heroes from each of the world’s six inhabited continental regions, the Goldman Environmental Prize honors the achievements and leadership of grassroots environmental activists from around the world, inspiring all of us to take action to protect our planet.

This year also marks the 30th anniversary of the Prize, which was founded in 1989 in San Francisco by philanthropists and civic leaders Rhoda and Richard Goldman. As Richard Goldman once noted, “We’d like to leave the world a little better than we found it.” In these 30 years, the Prize has had an immeasurable impact on the planet. To date, the Prize has honored 194 winners from 89 different nations, and has shined a light on many of the critical issues facing the Earth.

“I am so moved and inspired by these six environmental trailblazers,” said Susie Gelman, President of the Goldman Environmental Foundation. “Each of them has selflessly stood up to stop injustice, become a leader when leadership was critical, and vanquished powerful adversaries who would desecrate our planet. These are six ordinary, yet extraordinary, human beings who remind us that we all have a role in protecting the Earth.”

The winners will be awarded the Prize at an invitation-only ceremony at the San Francisco Opera House. Former Vice President and legendary environmental champion Al Gore will present the keynote address at the ceremony. A ceremony at the National Academy of Sciences in Washington, D.C., will follow on Wednesday, May 1, at 7:30 pm EDT.

“Thirty years ago, when Richard and Rhoda Goldman started the Goldman Environmental Prize, the idea of celebrating grassroots environmentalists was a novel one,” said former Vice President Al Gore. “Today, thanks in large part to the Goldmans, the world recognizes just how important it is to honor and illuminate those who have shown courage in the face of environmental destruction. Their efforts inspire all of us to protect our fragile planet Earth for future generations. I was fortunate to count Richard and Rhoda as good friends. Their legacy is global and profound. I proudly toast the Goldman family on this 30th anniversary of the Prize.”

Bayarjargal Agvaantseren helped create the 1.8 million-acre Tost Tosonbumba Nature Reserve in the South Gobi Desert—a critical habitat for the vulnerable snow leopard—and persuaded the Mongolian government to prohibit all mining within the reserve.

Under threat of violence, environmental lawyer Alfred Brownell stopped the clear-cutting of Liberia’s tropical forests by palm oil plantation developers. His campaign protected 513,500 acres of primary forest that constitute one of the world’s most important biodiversity hotspots. For his safety, he is living in temporary exile in the United States.

Alberto Curamil organized his Mapuche community to stop the construction of two hydroelectric projects on the sacred Cautín River in Chile. The projects would have diverted hundreds of millions of gallons of water each day, harming a critical ecosystem and exacerbating drought conditions. In 2018, Curamil was arrested and remains in jail today. Colleagues believe that he was targeted because of his activism.

Detailed biographical information, photographs, and video of all the winners are available by request or online at www.goldmanprize.org/pressroom