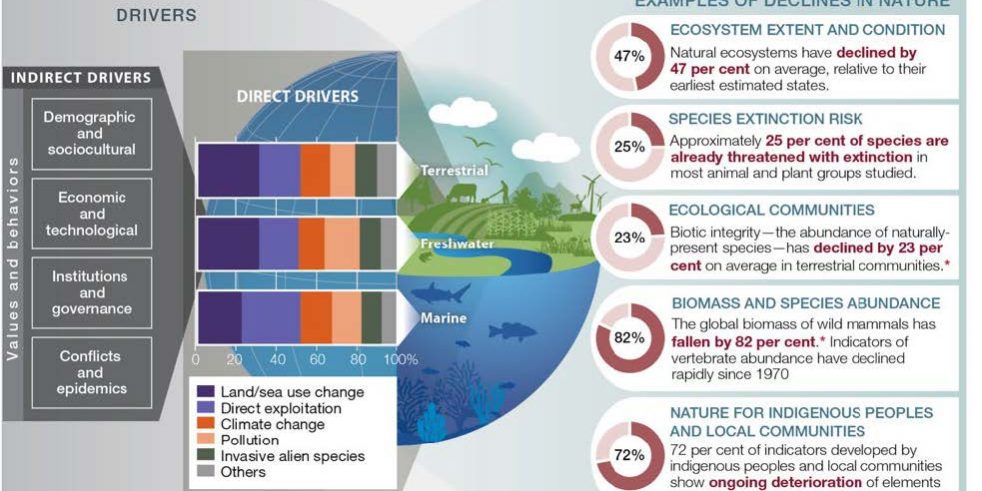 A definitive new global synthesis of the state of nature, ecosystems and nature’s contributions to people — the first such report since the landmark Millennium Ecosystem Assessment published in 2005, and the first ever that is inter-governmental — will be presented to representatives of 132 Governments for consideration of approval in May 2019.

Prepared by 150 leading international experts from 50 countries, balancing representation from the natural and social sciences, with additional contributions from a further 250 experts, working with the Intergovernmental Science-Policy Platform on Biodiversity and Ecosystem Services (IPBES), the Global Assessment of Biodiversity and Ecosystem Services will inform better policies and actions in the coming decade.

Three years in development, at a total cost of more than US$2.4 million, the IPBES Global Assessment draws on nearly 15,000 references, including scientific papers and government information. It is also the first global assessment ever to systematically examine and include indigenous and local knowledge, issues and priorities.

Often described as the ‘IPCC for Biodiversity’, IPBES is the global science-policy forum tasked with providing the best available evidence to all decision-makers for people and nature.

The report will offer an integrated overview of where the world stands in relation to key international goals, including the Sustainable Development Goals (SDGs), the Aichi Biodiversity Targets and the Paris Agreement on climate change. It examines causes of biodiversity and ecosystem change, the implications for people, policy options and likely future pathways over the next three decades if current trends continue, and other scenarios.

“The loss of species, ecosystems and genetic diversity is already a global and generational threat to human well-being. Protecting the invaluable contributions of nature to people will be the defining challenge of decades to come. Policies, efforts and actions – at every level – will only succeed, however, when based on the best knowledge and evidence. This is what the IPBES Global Assessment provides.” – Sir Robert Watson, IPBES Chair.

Important aspects of the Global Assessment

Building upon earlier IPBES assessment reports, especially the recently-released Land Degradation and Restoration Assessment and the Regional Assessment Reports for Africa, the Americas, Asia-Pacific and Europe and Central Asia (March, 2018), the Global Assessment:

• Covers all land-based ecosystems (except Antarctica), inland water and the open oceans
• Evaluates changes over the past 50 years — and implications for our economies, livelihoods, food security and quality of life
• Explores impacts of trade and other global processes on biodiversity and ecosystem services
• Ranks the relative impacts of climate change, invasive species, pollution, sea and land use change and a range of other challenges to nature
• Identifies priority gaps in our available knowledge that will need to be filled
• Projects what biodiversity could look like in decades ahead under six future scenarios: Economic Optimism; Regional Competition; Global Sustainability; Business as Usual; Regional Sustainability and Reformed Markets
• Assesses policy, technology, governance, behaviour changes, options and pathways to reach global goals by looking at synergies and trade-offs between food production, water security, energy and infrastructure expansion, climate change mitigation, nature conservation and economic development

Structure of the Global Assessment

The Summary for Policymakers (SPM) of the Global Assessment will be based on a set of six chapters, which provide all the technical support for the key messages of the SPM.

The chapters are described below:

1. Providing a road map and outlining key elements in the relationships between people and nature
2. Highlighting the current status and trends in nature, nature’s contributions to people and drivers of change
3. Assessing progress towards meeting the Aichi Targets, SDGs and the Paris Agreement
4. Exploring plausible future scenarios for nature and people to 2050
5. Focusing on the scenarios, pathways and options that lead to a sustainable future
6. Showcasing opportunities and challenges for decision makers at all levels and in a range of contexts

The IPBES Global Assessment will:

• Provide an agreed, evidence-based knowledge base to inform policy making for the decade ahead
• Contribute an analysis of the implications of the loss of biodiversity for achieving the Paris Climate Agreement, global biodiversity targets, the Sustainable Development Goals and other major world objectives
• Offer a multidimensional valuation of common global assets and how to sustain them
• Recognize and emphasize the role each actor has in improving conditions for nature and ecosystems, and the importance of aligning efforts
• Raise awareness of the importance of transformational multi-sectoral policies and governance structures, including the effects that policies and other indirect drivers have at a global scale and options to improve trans-regional policy-making
• Be a starting point for in-depth analyses of the role of actions and their global implications

February 2016
• Approved scoping report established the parameters of the assessment.

May 2017
• External experts reviewed first draft of the assessment, with review comments incorporated into the subsequent drafts by IPBES experts.

April 2018
• Governments and experts reviewed the second draft of the assessment and rst draft of the summary for policymakers. These comments have been addressed and will be incorporated into the final draft by IPBES experts.

May 2019
• Negotiation by member States at #IPBES7 Plenary session of the text of the Summary for Policymakers of the Global Assessment in Paris, France, followed by the planned public launch scheduled for 6 May 2019.

For breaking news, the latest announcements, calls for experts and more, register today as an IPBES stakeholder: http://www.ipbes.net/stakeholders

To be added to the IPBES media distribution list for alerts, releases and announcements, please email media@ipbes.net with the subject line: Subscribe

With 132 member Governments, the Intergovernmental Science-Policy Platform on Biodiversity and Ecosystem Services (IPBES) is the global body that assesses the state of biodiversity and nature’s contributions to people, in response to requests from decision-makers, and outlines options for the future based on different socio-economic choices.

The mission of IPBES is to strengthen policy and decisions through science, for the conservation and sustainable use of biodiversity, long-term human well-being and sustainable development.

The IPBES Secretariat is hosted by the German Government and located on the United Nations campus in Bonn. More than 1000 scientists worldwide contribute to the work of IPBES on a voluntary basis. They are nominated by their Governments or organisations and selected by the IPBES Multidisciplinary Expert Panel.

The IPBES Pollination Assessment, released in 2016, was covered in 18 languages by over 1,300 media outlets in more than 80 countries. For the news release see: http://bit.ly/2sq6gbQ

The IPBES Regional Assessments and the thematic Assessment of Land degradation and Restoration, released in 2017, was covered in 37 languages by over 2,500 media outlets in more than 124 countries. For the news releases see: http://bit.ly/2C0tnNu and http://bit.ly/2ylipyo