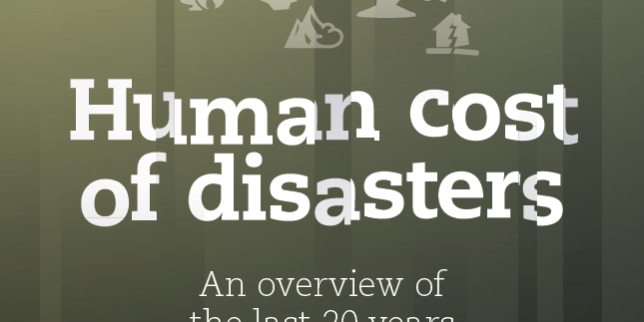 A UN report published to mark the International Day for Disaster Risk Reduction on October 13, confirms how extreme weather events have come to dominate the disaster landscape in the 21st century.

In the period 2000 to 2019, there were 7,348 major recorded disaster events claiming 1.23 million lives, affecting 4.2 billion people (many on more than one occasion) resulting in approximately US$2.97 trillion in global economic losses.

This is a sharp increase over the previous twenty years. Between 1980 and 1999, 4,212 disasters were linked to natural hazards worldwide claiming approximately 1.19 million lives and affecting 3.25 billion people resulting in approximately US$1.63 trillion in economic losses.

The last twenty years has seen the number of major floods more than double, from 1,389 to 3,254, while the incidence of storms grew from 1,457 to 2,034. Floods and storms were the most prevalent events.

The report “The Human Cost of Disasters 2000-2019” also records major increases in other categories including drought, wildfires and extreme temperature events. There has also been a rise in geo-physical events including earthquakes and tsunamis which have killed more people than any of the other natural hazards under review in this report.

Mami Mizutori, the UN Secretary-General’s Special Representative for Disaster Risk Reduction, said today: “We are willfully destructive. That is the only conclusion one can come to when reviewing disaster events over the last twenty years. COVID-19 is but the latest proof that political and business leaders are yet to tune in to the world around them.

“Disaster management agencies, civil protection departments, fire brigades, public health authorities, the Red Cross and Red Crescent, and many NGOs are fighting an uphill battle against an ever-rising tide of extreme weather events. More lives are being saved but more people are being affected by the expanding climate emergency. Disaster risk is becoming systemic with one event overlapping and influencing another in ways that are testing our resilience to the limit. The odds are being stacked against us when we fail to act on science and early warnings to invest in prevention, climate change adaptation and disaster risk reduction.

“Good disaster risk governance depends on political leadership and delivery on the promises made when the Paris Agreement and the Sendai Framework for Disaster Risk Reduction were adopted five years ago. The report is a reminder to UN Member States of their commitment to strengthen disaster risk governance and to have national and local strategies for disaster risk reduction in place by 2020. This is a key target of the global blueprint for reducing disaster losses, the Sendai Framework for Disaster Risk Reduction, which was adopted at a World Conference in 2015. So far, 93 countries have put national strategies in place.”

Professor Debarati Guha-Sapir, Centre for Research on the Epidemiology of Disasters, University of Louvain, Belgium, said: “This report covers the first twenty years of this century and does not include biological hazards like COVID-19 but it clearly highlights the level of human suffering and economic loss that result from failure to adapt to climate change and to reduce greenhouse gas emissions. If this level of growth in extreme weather events continues over the next twenty years, the future of mankind looks very bleak indeed.

“We will have to live with the consequences of existing levels of climate change for a long time to come and there are many practical measures that can be taken to reduce the burden of disaster losses especially on low and middle-income countries that lack resources and are most exposed to economic losses on a scale that undermines their efforts to eradicate poverty and to provide good quality social services including health and education.”

The statistics in this report are from the Emergency Events Database (EM-DAT) maintained by the Centre for Research on the Epidemiology of Disasters (CRED) which records disasters which have killed ten or more people; affected 100 or more people; resulted in a declared state of emergency; or a call for international assistance.

In terms of affected countries globally, China (577 events) and the USA (467 events) reported the highest number of disaster events, followed by India (321 events), Philippines (304 events), and Indonesia (278 events). These countries all have large and heterogenous landmasses and relatively high population densities in at-risk areas.

Overall, eight of the top 10 countries by disaster events are in Asia.