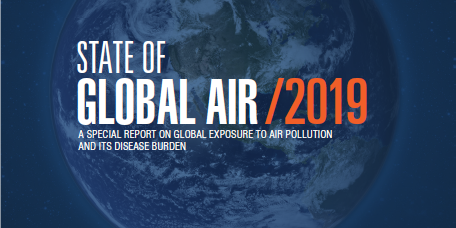 Exposure to outdoor and indoor air pollution could, on average shorten the life of a child born today by 20 months, according to a new global study, State of Global Air 2019 (SoGA2019).

Overall, air pollution is responsible for more deaths than many better-known risk factors such as malnutrition, alcohol use, and physical inactivity, according to the annual SoGA2019 report and interactive website published today at www.stateofglobalair.org by the Health Effects Institute. Air pollution is the 5th highest cause of death among all health risks, ranking just below smoking; each year, more people die from air pollution related disease than from road traffic injuries or malaria.

For the first time this year’s report and website estimate the effect of air pollution on how long people live, or life expectancy. Worldwide, air pollution reduced life expectancy by an average of 20 months in 2017, a global impact rivaling that of smoking. Lost life rises to over 2 years and 6 months for children born in South Asia (Bangladesh, India, Nepal, Pakistan) where air pollution is at its worst.

Long-term exposure to outdoor and indoor air pollution contributed to nearly 5 million deaths from stroke, heart attack, diabetes, lung cancer, and chronic lung disease worldwide in 2017. Importantly, aggressive actions on fighting air pollution by China have showed the first signs of progress in reducing exposure, even as South Asian countries – Bangladesh, India, Nepal and Pakistan – led the world as the most polluted region, with over 1.5 million air-pollution related deaths.

“A child’s health is critical to the future of every society, and this newest evidence suggests a much shorter life for anyone born into highly polluted air,” said Dan Greenbaum, President of HEI. “In much of the world, just breathing in an average city is the health equivalent to being a heavy smoker,” he added.

The analysis found that China and India together were responsible for over half of the total global attributable deaths, with both countries facing over 1.2 million early deaths from all air pollution in 2017. China has made initial progress, beginning to achieve air pollution declines; in contrast, Pakistan, Bangladesh, and India have experienced the steepest increases in air pollution levels since 2010.

The State of Global Air 2019 annual report and accompanying interactive website are designed and implemented by the Health Effects Institute in cooperation with the Institute for Health Metrics and Evaluation (IHME) at the University of Washington, the University of British Columbia, and the University of Texas – Austin. IHME is an independent population health research center that coordinates the annual Global Burden of Disease study, a systematic scientific effort to quantify the magnitude of health loss from all major diseases, injuries, and risk factors in populations across the world. Its results are published each year in the international medical journal, The Lancet. HEI provides leadership for the air pollution portion of the GBD; HEI’s www.stateofglobalair.org is the only report and website where all of the estimates of exposure to air pollution and their burden of disease included in the GBD air pollution analyses are made available for full public access.

“The Global Burden of Disease leads a growing worldwide consensus – among the WHO, World Bank, International Energy Agency and others – that air pollution poses a major global public health challenge,” said Robert O’Keefe, Vice President of HEI. “In the developing world, where half the world’s population faces a double burden of indoor and outdoor pollution,” he added.

The Global Burden of Disease is an international effort to estimate the number of deaths and lost years of healthy life due to some 300 diseases in 195 countries, and how much of this burden is caused by 84 different risk factors, including diet, high blood pressure, tobacco smoking and air pollution. The Institute for Health Metrics and Evaluation (IHME) leads an international team of nearly 3700 scientists from 146 countries in conducting the analysis.