WMO Statement on the State of the Global Climate 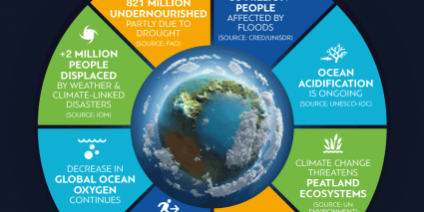 The physical signs and socio-economic impacts of climate change are accelerating as record greenhouse gas concentrations drive global temperatures towards increasingly dangerous levels, according to a new report from the World Meteorological Organization.

The WMO Statement on the State of the Global Climate in 2018, its 25th anniversary edition, highlights record sea level rise, as well as exceptionally high land and ocean temperatures over the past four years.

This warming trend has lasted since the start of this century and is expected to continue.

These key climate change indicators are becoming more pronounced. Carbon dioxide levels, which were at 357.0 parts per million when the statement was first published in 1994, keep rising – to 405.5 parts per million in 2017. For 2018 and 2019, greenhouse gas concentrations are expected to increase further.

The WMO climate statement includes input from national meteorological and hydrological services, an extensive community of scientific experts, and United Nations agencies. It details climate related risks and impacts on human health and welfare, migration and displacement, food security, the environment and ocean and land-based ecosystems. It also catalogues extreme weather around the world.

“Extreme weather has continued in the early 2019, most recently with Tropical Cyclone Idai, which caused devastating floods and tragic loss of life in Mozambique, Zimbabwe and Malawi. It may turn out to be one of the deadliest weather-related disasters to hit the southern hemisphere,” said Mr Taalas.

“Idai made landfall over the city of Beira: a rapidly growing, low-lying city on a coastline vulnerable to storm surges and already facing the consequences of sea level rise. Idai’s victims personify why we need the global agenda on sustainable development, climate change adaptation and disaster risk reduction,” said Mr Taalas.

The start of this year has also seen warm record daily winter temperatures in Europe, unusual cold in North America and searing heatwaves in Australia. Arctic and Antarctic ice extent is yet again well below average.

According to WMO’s latest Global Seasonal Climate Update (March to May), above average sea surface temperatures – partly because of a weak strength El Niño in the Pacific – is expected to lead to above-normal land temperature, particularly in tropical latitudes.

The WMO Statement on the State of the Global Climate report will be formally launched at a joint press conference with UN Secretary General António Guterres, UN General Assembly President María Fernanda Espinosa Garcés and WMO Secretary-General Petteri Taalas at United Nations headquarters in New York. It coincides with a high-level meeting on Climate and Sustainable Development for All.
“The data released in this report give cause for great concern. The past four years were the warmest on record, with the global average surface temperature in 2018 approximately 1°C above the pre-industrial baseline,” Mr Guterres wrote in the report.

“These data confirm the urgency of climate action. This was also emphasized by the recent Intergovernmental Panel on Climate Change (IPCC) special report on the impacts of global warming of 1.5°C. The IPCC found that limiting global warming to 1.5°C will require rapid and far reaching transitions in land, energy, industry, buildings, transport and cities and that global net human-caused emissions of carbon dioxide need to fall by about 45% from 2010 levels by 2030, reaching net zero around 2050,” wrote Mr Guterres.

“There is no longer any time for delay,” said Mr Guterres, who will convene a Climate Action Summit at Heads of State level on 23rd September 2019. The State of the Climate report will be one of WMO’s contributions to the Summit. Mr Taalas has been appointed Chair to the Summit’s Science Advisory Group.

“It is one of my priorities as the President of the General Assembly to highlight the impacts of climate change on achieving the sustainable development goals and the need for a holistic understanding of the socio-economic consequences of increasingly intense extreme weather on countries around the world. This current WMO report will make an important contribution to our combined International action to focus attention on this problem,’’ said Ms Espinosa Garcés.