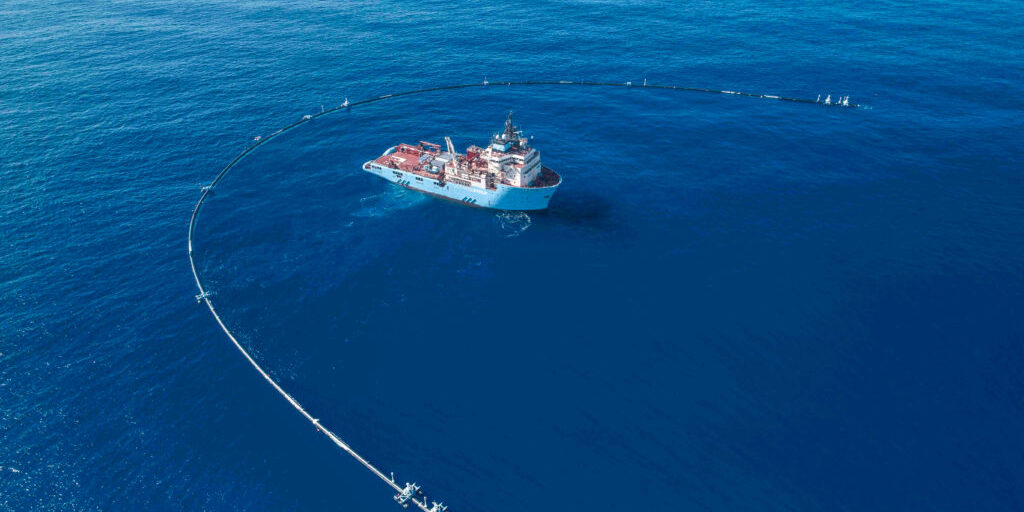 • A model simulating a device touted to clear plastic from the “Great Pacific garbage patch” shows that it would collect much less than 1 percent of the ocean’s plastic pollution by 2150.
• The study was the first to quantify the device’s ability to remove marine debris.
• A more comprehensive approach to reducing plastic, including holding corporations responsible, is needed in addition to efforts to scoop trash from the sea.

The Ocean Cleanup is a highly touted nonprofit with the ambitious goal of cleaning up 90 percent of the ocean’s plastic. In reality, the initiative’s impact on the world’s floating debris would be minimal, researchers reported recently in Science of the Total Environment.

“I think the general public was believing that we had a solution to the plastic problem,” said Sönke Hohn, a marine biologist at the Leibniz Centre for Tropical Marine Research in Bremen, Germany, at the time of the study and lead author. “Our research showed that we are far away from having solved this problem if we don’t keep changing our behavior.”

Each year, 5 million to 13 million metric tons (11 billion to 28 billion pounds) of plastic wash into the ocean. The amount is expected to triple over the next century. Not only does this pose a danger to marine life, which can get entangled in plastic or ingest it, but it’s also a risk to human health through eating contaminated seafood.

The Ocean Cleanup is one of the most prominent initiatives for confronting this rapidly growing ocean waste. Its cleanup device, according to marine biogeochemist Matthias Egger from the nonprofit, works like a “giant Pac-Man,” sweeping up the debris using a screen attached to a floating barrier. The organization claims that it can use this device to clear the Great Pacific garbage patch—a vast gyre of plastic litter—of half its trash in five years.

To understand if the device could meet this goal, Hohn and his colleagues developed a mathematical model to simulate scooping plastic from the ocean. The team studied several scenarios: business as usual with no manual removal; one cleanup device; and a flotilla of 200 cleanup devices.

Results showed that one device would only remove a small fraction of 1 percent of the plastic by 2150. Even with 200 cleanup devices spread around the ocean working continuously for 120 years, the impact was still extremely modest. The model was the first to quantify the device’s ability to remove accumulated plastic from the ocean.

“The Ocean Cleanup is not going to solve the actual problem,” said Christine Figgener, a marine conservation biologist at the Costa Rican Alliance for Sea Turtle Conservation and Science, who was not involved in the study. “We need to solve the problem from all possible angles.

However, Egger disputes the study’s methods. Because the model assumes that plastic is spread evenly across the ocean, he believes Hohn’s team has underestimated the capability of the device.

“There are ocean garbage patches, which we focus on, and concentrations [of debris] there are up to 10,000 times higher than in surrounding waters,” Egger told Mongabay. The Great Pacific garbage patch, he explained, only covers about 0.4 percent of the total ocean’s surface, but it may contain up to 30 to 50 percent of the world’s marine plastic.

Nevertheless, scientists on both sides agreed that removing the debris is only part of the solution. Figgener, a vocal ocean advocate, sparked a global anti-straw movement in 2015 after a video went viral of her team removing a plastic straw from the nose of a sea turtle.

“We need to realize that corporations are mainly responsible for our plastic tides,” Figgener said. “If we stop buying from certain corporations and products, I think we will see more and more alternatives, maybe even from the same companies, because they will see that people are demanding something else.”

Agostino Merico, a physicist also at the Leibniz Centre and senior author of the study, stressed that the team’s objective was not to dismiss the efforts of the Ocean Cleanup.

Isabella Backman (@IzzyBackman) is a graduate student in the Science Communication Program at the University of California, Santa Cruz.