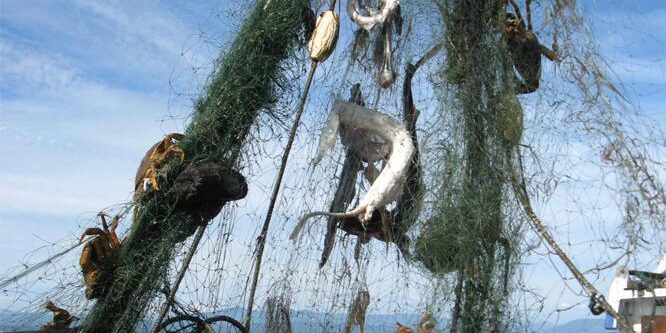 Abandoned fishing gear is the deadliest form of plastic debris for marine life and has already driven the vaquita porpoise and other marine mammals to the brink of extinction, yet even as this crisis continues to intensify, little attention is being paid to it by governments or industry, according to a new report from WWF.

The report, Stop Ghost Gear: The most deadly form of marine plastic debris, shines a lights on how ghost gear* is responsible for harming 66 per cent of marine mammal species, half of seabird species and all species of sea turtles, often subjecting them to a slow, painful and inhumane death. It also damages vital marine habitats such as coral reefs and mangroves and threatens the food sources and livelihoods of coastal communities and fishers, according to the report, which highlights how tackling ghost gear should be at the fore of efforts to combat the global plastic pollution problem.

“Entanglement in ghost gear can cause prolonged suffering, result in long-term physiological effects and stress in individual animals, and even death,” said Leigh Henry, director wildlife policy, wildlife conservation, World Wildlife Fund. “WWF is seeking to shine a light on this devastating global threat to marine life. We have the power to stop it, but problems like these require integrated solutions and commitments from governments, fishing gear designers, producers, fishers, and the general public to prevent these plastics from strangling our oceans”.

The report shows that:

• At least 10 per cent of marine litter is estimated to be made up of fishing waste, which means that between 500,000 and 1 million tons of fishing gear are entering the ocean every year.

• The number of species affected by either entanglement or ingestion of plastic debris has doubled since 1997, from 267 to 557 species. 66% of marine mammals, 50% of seabirds, and all 7 species of marine turtles.

• In the upper Gulf of California, Mexico, illegal and abandoned gillnets have driven the vaquita porpoise to the brink of extinction – only around 10 individuals remain.

• Studies estimate that over 90 per cent of species caught in ghost gear are of commercial value.

• Ghost gear can act as a navigation hazard, affecting a vessel’s propulsion and the ability to maneuver, causing operational delays, economic loss and, in extreme cases, injuries or even the loss of lives of crew members or ferry passengers.

As well as calling on governments to support the establishment of a new treaty to stop plastic pollution, WWF is encouraging countries around the globe to join the Global Ghost Gear Initiative (GGGI) – a global alliance of fishing industry, private sector, corporates, NGOs, academia and governments focused on solving the problem of lost and abandoned fishing gear worldwide. On July 16, 2020 the Department of State announced the United States formally became a member of the GGGI.

“Improving the sustainability and responsibility of the fishing industry will be essential to solving this unseen threat. If we’re going to protect the health of our oceans, fishers must be part of the global effort to combat ghost gear,” said Karen Douthwaite, lead specialist, oceans, World Wildlife Fund. “But this is a global problem that requires coordinated action to solve, and we must have a global binding framework in place. That’s why WWF is calling on governments around the world to create and sign on to a new Treaty to Combat Marine Plastic Pollution.”

Members of the public are invited to join almost 2 million others in signing the petition calling governments to take urgent action.

*Ghost gear is a common name for abandoned, lost, or otherwise discarded fishing gear such as gillnets, traps and pots, or fish aggregation devices. Gear is abandoned when the fisher cannot retrieve it, which happens when gear is snagged on reefs, rocks or other obstructions. Gear is considered lost if a fisher cannot locate it or has lost operational control over it. This can happen when marker buoys become detached, or tides or wave action or snagging carry fishing gear away from its deployment location. Illegal, unreported and unregulated (IUU) fishing also contributes considerable amounts of ghost gear, as illegal fishers abandon or discard fishing gear to conceal their activities. Sometimes fishing gear is also discarded into the ocean deliberately. This behavior can be motivated by lack of adequate onshore disposal facilities, high disposal costs, or lack of storage space onboard.