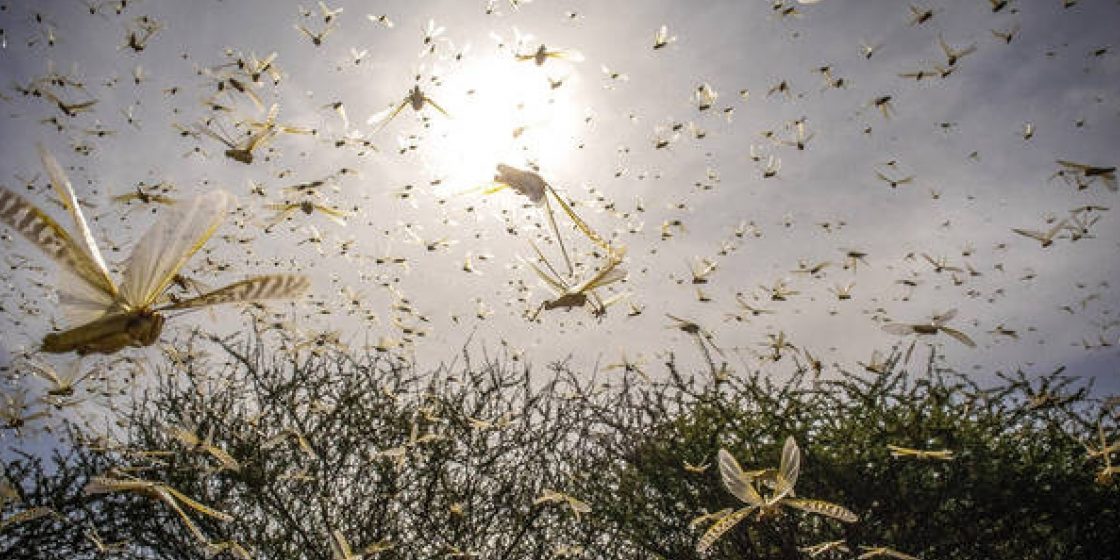 Sustained efforts to contain East Africa’s worst invasion of desert locusts in decades are forging ahead, despite limits on the flow of personnel and equipment stemming from the global COVID-19 pandemic – the UN food agency.


The infestation remains alarming, particularly in Ethiopia, Kenya and Somalia where it poses an unprecedented threat to food security and livelihoods for millions, noted the Food and Agriculture Organization (FAO).

Restrictions imposed by many countries to contain the coronavirus outbreak are creating challenges, but FAO said is it working with Governments, farmers and agricultural producers to overcome hurdles.

“There is no significant slowdown because all the affected countries working with FAO consider desert locusts a national priority”, said Cyril Ferrand, FAO’s Resilience Team Leader for East Africa.

“While lockdowns are becoming reality, people engaged in the fight against the (locust) upsurge are still allowed to conduct surveillance and air and ground control operations,” he said.

Widespread rainfall in March is expected to generate a dramatic increase in locust numbers in the coming months, with new swarms due to move from Kenya into South Sudan and Uganda.

The situation is also worrying in Iran and Yemen where a new generation of locusts is emerging, the Rome-based agency said.

So far, more than 240,000 hectares across 10 countries have been treated with chemical pesticides or biopesticides, and 750 people have been trained to carry out ground locust control operations.

But COVID-19 is having an impact on the supply of pesticides as well as motorized sprayers. Mr. Ferrand said the biggest challenge is delays in pesticide deliveries due to a significant reduction in global air freight operations.

“Our absolute priority is to prevent a breakdown in pesticide stocks in each country”, he said. “That would be dramatic for rural populations whose livelihoods and food security depend on the success of our control campaign.”

To respond to restrictions on the movement of personnel, FAO is making greater use of remote data collection through a critical network of partners, civil society, extension workers and grassroots organizations.

It is encouraging all countries to use a rugged handheld device – called eLocust3 – that can record and transmit real-time data via satellite to national locust centres and the Desert Locust Information Service at FAO headquarters.

More than 450 of the devices have gone out to teams in northern Africa, the Near East and southwest Asia.

“We need to rely on a network of partners in the field in order to collect vital information because we cannot go everywhere due to COVID-19,” Mr. Ferrand said.

Desert locusts are regarded as the world’s most destructive migratory pest, with a single swarm of up to 80 million capable of covering just one square kilometer.

FAO – which has scaled up its desert locust funding appeal to $153.2 million – estimates that locust numbers could grow another 20 times during the upcoming rainy season unless control activities are stepped up.

In the six East African countries hardest hit or at risk of locusts – Ethiopia, Kenya, Somalia, South Sudan, Uganda and the United Republic of Tanzania – around 20 million people already experience food insecurity. So do another 15 million in Yemen, which is already grappling with the humanitarian impact of war.

COVID-19 has been slow to reach Africa compared to other parts of the world, but infection has grown exponentially and is continuing to spread, the World Health Organization (WHO) said this week. It put the number of confirmed cases throughout the continent as of 7 April at more than 10,000, with more than 500 fatalities.

The Food and Agriculture Organization (FAO) is a specialized agency of the United Nations that leads international efforts to defeat hunger.

Our goal is to achieve food security for all and make sure that people have regular access to enough high-quality food to lead active, healthy lives. With over 194 member states, FAO works in over 130 countries worldwide.