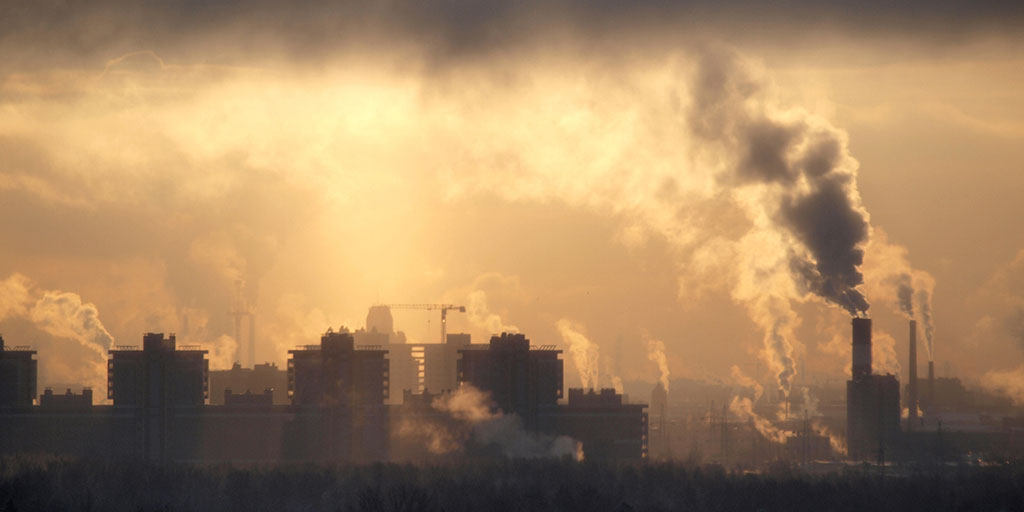 Air pollutants are incredibly diverse in terms of composition, health effects, and sources, ranging from the thick brown smoke belched out of monolithic mega-factories to invisible and insidious threats to your health and well-being.

Coarse particles, or PM10, are inhalable particles with a diameter ranging between 2.5 and 10 microns.

All that dust floating around your attic or the ominous smoke billowing from a wildfire are great examples of PM10 particles that you can see. These airborne particles can affect your throat, eyes, and nose, and can cause serious health effects.

Fine particles, or PM2.5, are inhalable particles with a diameter of less than 2.5 microns, which means they can only be seen underneath a microscope. Common sources of fine particulate matter include pet dander, dust mites, bacteria, and dust from construction and demolition sites. PM2.5 particles are small enough to potentially lodge into your lung tissue, causing respiratory illnesses like asthma, bronchitis, and emphysema.

Long-term exposure to PM2.5 can also reduce both your lung function and life expectancy.

Ultrafine particles (UFPs) are less than 0.1 microns in diameter and make up roughly 90% of all airborne particles.

UFPs are the most dangerous particulate matter because their tiny size makes them extremely inhalable. Once inhaled, they get deposited into your lungs and absorbed directly into your bloodstream — providing a fast-track to any organ within your body.

The health effects of ultrafine particles are particularly nasty, increasing your risk for heart attacks and strokes and reducing your life expectancy.

Microscopic flecks of skin shed by birds, cats, dogs, rodents, and other cuddly critters with fur or feathers.

Pet dander is easily spread through your home and out to schools, hospitals, and other public places — even if there aren’t any animals present. Exposure to pet dander can trigger pet allergies, which can cause symptoms like:
• sneezing
• runny nose
• itchy, red, or watery eyes
• nasal congestion

Every spring, summer, and fall, plants release tiny pollen grains to fertilize other plants of the same species. Once airborne, these pesky pollen grains can infiltrate your respiratory system, where your body identifies them as invaders and releases antibodies to attack them.

Most pollens that spur allergic reactions derive from trees, grasses, and weeds, such as ragweed. People with pollen allergies experience symptoms that are similar to pet allergies, including sneezing, runny nose, and nasal congestion.

Molds are fungi. Most people associate mold with that icky green fuzz on spoiled bread, but there are more than 100,000 identified species of mold.

Common sources of mold in homes, business, and schools include:
• leaks through roofs, walls, and basements
• condensation on windows and in bathrooms
• standing water in drains, on floors, and in dehumidifying equipment
• wet floors and carpets

Since leaded gasoline has been phased out, airborne lead concentrations decreased in the US by 94% between 1980 and 2007; however, industrial processes such as lead-acid battery manufacturing have become a significant source of airborne lead.

Lead exposure has a cumulative effect on your long-term health, meaning the more you’re exposed to lead over time, the greater the likelihood that you’ll experience serious health issues later on in your life.

VOCs are emitted from a dizzying array of everyday items found in your home, including:
• building materials and furnishings
• paints, paint strippers, and other solvents
• cleaners and disinfectants
• air fresheners and aerosol sprays
• pesticides
• dry-cleaned clothing

Exposure to VOCs can have a host of short and long-term health effects, such as:
• irritation to eyes, nose, and throat
• headaches, loss of coordination, and nausea
• damage to liver, kidneys, and central nervous system
• fatigue
• allergic skin reaction
• cancer (the VOC formaldehyde is a known human carcinogen)

Carbon monoxide (CO), known as the “invisible killer,” is an odorless, colorless gas that frequently goes undetected, killing more than 400 people in the U.S. every year.

Carbon monoxide is typically created from combustion processes, like the burning of wood, oil, coal, charcoal, natural gas, and propane, but it can also be found indoors from:
• unvented kerosene and gas heaters
• leaking chimneys and fireplaces
• back-drafting from furnaces and water heaters

Since you cannot see or smell carbon monoxide, it’s crucial that you install a carbon monoxide detector in the hallway near each separate sleeping area in your home.

Ozone is a naturally occurring gas found in both the Earth’s upper atmosphere, where it helps block out
harmful ultraviolet light from the sun. However, when ozone is found at ground level, it’s toxic to human beings.

Ground-level ozone is formed when pollutants emitted by cars, power plants, refineries, and other sources chemically react in the presence of sunlight. Ever wonder why there’s more of that unsightly smog during hot summer days? That’s because the hotter the day and the stronger the sun, the more ozone is formed.

Nitrogen dioxide (NO2) is a harsh-smelling gas formed as a result of road traffic and other fossil fuel combustion processes.

To make matters more malicious, nitrogen dioxide is also a precursor for ozone and particulate matter, and it plays a role in the formation of acid rain.

You’ll encounter nitrogen dioxide indoors if your heater or gas stove is unvented (also carbon monoxide as previously mentioned). Nitrogen dioxide can cause such health effects as:
• irritation to lungs
• lower resistance to respiratory infections

Sulfur dioxide (SO2) is a colorless gas or liquid with a strong, pungent odor.

Unfortunately, the presence of sulfur dioxide in the air is almost exclusively man-made. Sulfur dioxide is produced when fossil fuels such as coal and oil are burned in industrial processes, and when mineral ores like aluminum are smelted.

This noxious gas is also frequently responsible for causing poor visibility and acid rain. The short-term health effects of sulfur dioxide exposure include:
• irritation to nose and throat
• shortness of breath
• death (short-term exposure to high levels of SO2)

IQAir is a Swiss-based air quality technology company that since 1963 empowers individuals, organizations and communities to breathe cleaner air through information, collaboration and technology solutions.