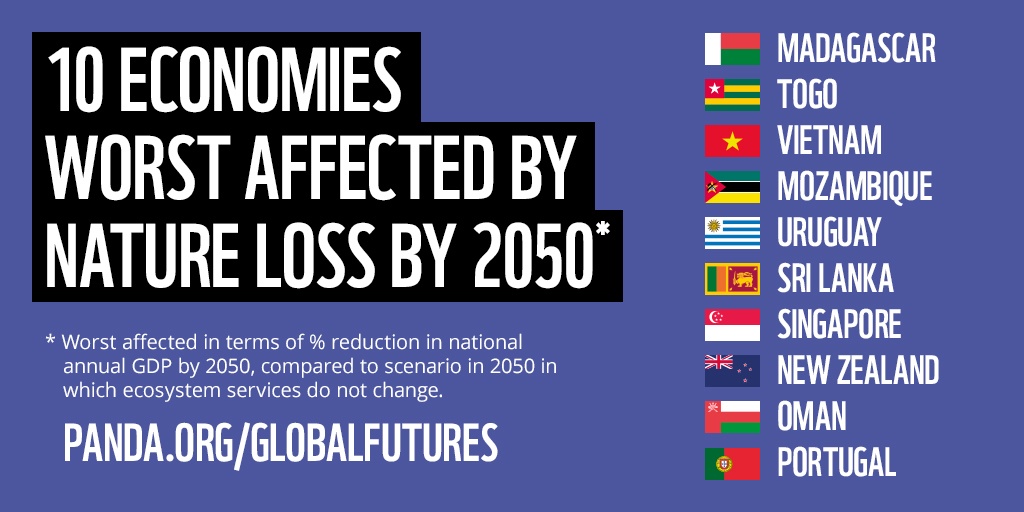 If the world doesn’t act urgently to address the nature and climate emergency, the world stands to see $10 trillion wiped off the global economy over the next 30 years

A new report from World Wildlife Fund (WWF) reveals for the first time the countries whose economies would be worst affected over the next 30 years if the world doesn’t act urgently to address the global environmental crisis.

The study, Global Futures, which calculated the economic cost of nature’s decline across 140 countries ranging from India to Brazil, shows that if the world carries on with “business as usual”, the US would see the largest losses of annual GDP in absolute terms, with $83 billion wiped off its economy each year by 2050 – an amount equivalent to the entire annual GDP of Guatemala.

Japan and the UK also stand to lose staggering amounts – $80 billion and $21 billion every year respectively. In all three cases, this is due largely to expected damage to their coastal infrastructure and agricultural land through increased flooding and erosion as a result of losses of natural coastal defences such as coral reefs and mangroves.

Developing countries will also be badly affected, with Eastern and Western Africa, central Asia and parts of South America hit particularly hard, as nature loss impacts on production levels, trade and food prices. According to the report, the top three countries predicted to lose the most as a percentage of their GDP are Madagascar, Togo and Vietnam, which by 2050 are expected to respectively see declines of 4.2 per cent, 3.4 per cent and 2.8 per cent per year.

“This ground-breaking study shows how conserving nature is not only a moral issue but a social and economic one. Not only will losing nature have a huge impact on human life and livelihoods, it will be catastrophic for our future prosperity. People across the world are already feeling the impact of rising food prices, droughts, commodity shortages, extreme flooding and coastal erosion. Yet for the next generation things will be many times worse, with trillions wiped off world economies by 2050,” said Marco Lambertini, Director General of WWF International.

“What’s even more alarming is that these are conservative estimates as, at present, only some of the many benefits nature provides us can be modelled. Nor is it possible to take into account the risk-multiplying effects of environmental tipping points, beyond which ecosystems change rapidly and irreversibly, leading to sudden catastrophic loss of nature’s services. If all of these issues were factored in, the figures would be even starker.”

The Global Futures study used new economic and environmental modelling to assess what the macroeconomic impact would be if the world pursued “business as usual”, including widespread and untargeted land-use change, continued increase in emissions of greenhouse gases, and further loss of natural habitats. It found this approach would cost the world at least $479 billion a year, adding up to $9.87 trillion by 2050 – roughly equivalent to the combined economies of the UK, France, India and Brazil.

In contrast, under a scenario in which land-use is carefully managed to avoid further loss of areas important for biodiversity and ecosystem services, which the study terms the ‘Global Conservation’ scenario, economic outcomes would be dramatically better, with global GDP rising by $490 billion per year above the business as usual calculation.

This pioneering method of analysis was created through a partnership between WWF, the Global Trade Analysis Project at Purdue University, and the Natural Capital Project, co-founded by the University of Minnesota.

Steve Polasky, Co-Founder of the Natural Capital Project, said: “The world’s economies, businesses and our own well-being all depend on nature. But from climate change, extreme weather and flooding to water shortages, soil erosion and species extinctions, evidence shows that our planet is changing faster than at any other time in history. The way we feed, fuel and finance ourselves is destroying the life-support systems on which we depend, risking global economic devastation.”

The Global Futures study predicts annual global losses by 2050 of:

• $327 billion from damaged protections from flooding, storm surges and erosion due to changes in vegetation along coastlines and sea-level rises

• $15 billion from lost habitats for bees and other pollinating insects

Thomas Hertel, Executive Director of the Global Trade and Analysis Project, said: “The science and economics are clear. We can no longer ignore the strong economic case for restoring nature. Inaction will cost us far more than actions aimed at protecting nature’s contributions to the economy. To ensure positive global futures, we need to achieve more sustainable patterns of production and land use, and reform economic and financial systems to incentivize nature-based decision making.”

The study also foresees global price hikes over the next 30 years for key commodities, as the world’s agricultural sector will be hardest hit by declines in nature, such as water shortages and a decrease in bees and other pollinating insects. This could ultimately lead to a rise in food prices for consumers globally, with implications for food security in many regions.

Mr Lambertini said: “We depend on nature much more than nature depends on us. It is hard to imagine a stable, just and prosperous society if forests disappear, pollinators vanish, biodiversity collapses and rivers and the ocean are depleted. The good news is that these disastrous outcomes can be averted if – instead of business as usual – governments act urgently to halt nature loss and tackle our planetary emergency. We need nothing short of a New Deal for Nature and People, as comprehensive, ambitious and science based as the global climate deal agreed in Paris in 2015.”