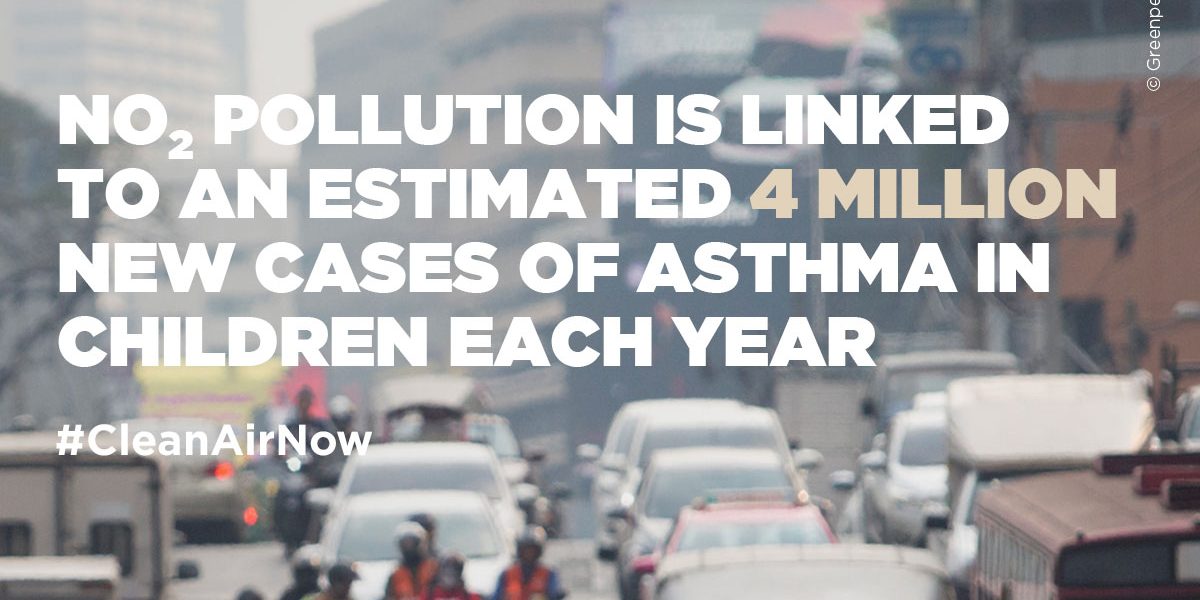 A new report by Greenpeace reveals the cost of air pollution from fossil fuels and highlights solutions that can protect our health and benefit our communities. Air pollution generated from burning fossil fuels is attributed to approximately 4.5 million premature deaths worldwide every year, the report shows. Air pollution increases the incidence of chronic and acute illnesses and contributes to millions of hospital visits and billions of work absences due to illness each year. It also damages our economies and the environment.

For the first time, Greenpeace Southeast Asia and the Centre for Research on Energy and Clean Air (CREA) have quantified the global cost of air pollution from fossil fuels, finding that it has reached an estimated US$8 billion per day, or roughly 3.3% of the world’s GDP. While coal, oil and vehicle companies continue to push outdated technologies, our health and our communities are paying the price.

Air pollution from burning fossil fuels, primarily coal, oil, and gas, is attributed to approximately 4.5 million premature deaths worldwide each year, a figure that exceeds global road accident deaths by more than threefold.[1]The incidence of stroke has been linked to PM2.5 exposure, and 600,000 deaths from stroke annually can be attributed to fossil fuel derived PM2.5 exposure.

The economic cost of air pollution reflects pollution concentrations, population size and the availability and cost of healthcare. We found that China Mainland, the United States and India bear the highest costs from fossil fuel air pollution worldwide, at an estimated US$900 billion, US$600 billion and US$150 billion per year, respectively. Yet while the cost of our reliance on coal, oil and gas continues to soar, life-saving alternatives are increasingly widespread and affordable.

Many solutions to fossil fuel air pollution are also the solutions to climate change. Clean transport and renewable energy not only bring significant reductions in toxic pollutants such as PM2.5, NO2 and ozone, but also help to keep climate change-causing greenhouse gases out of the atmosphere.

Moreover, solutions to the air pollution crisis have been shown to bring significant financial returns. According to a study published by the United States Environmental Protection Agency, every US$1 invested under the United States Clean Air Act yielded at least US$30 in return[2]. Likewise, a weekly car-free day in Bogota, Colombia yielded US$3.20 to US$4.30 in health benefits for every US$1 invested in the program, according to a study published in the Journal of Urban Health.[3] The financial benefits of air pollution reduction are visible in high- and low-income countries alike.

In cities around the world, private cars clog our streets with traffic, and diesel and petrol engines spew dangerous pollutants, threatening our health.

One of the most important ways that governments can catalyze sustainable transport is to set a phase-out date for diesel, gas, and petrol cars, and to introduce comprehensible and affordable public transport, with safe walking and cycling infrastructure. We need to move away from private cars as the primary mode of transport, and initiatives like car-free days allow us to imagine what our cities would look like without traffic and pollution.

A phase-out of existing coal, oil and gas infrastructure is not only essential to avoid the worst impacts of global climate change, but it brings major health benefits due to the associated reduction in air pollution.

Research shows that the closure of coal-fired power plants can yield health benefits that exceed the value of electricity generated.[5] According to a study published in the Proceedings of the National Academy of Sciences, an expanded fossil fuel phase-out and investment in clean energy sources could reduce premature deaths related to air pollution worldwide by up to nearly two thirds[6].

The health impacts are determined by combining pollutant concentration maps[7],[8] with country-level health statistics[9] and functions that describe the incidence of health outcomes for a given pollutant concentration[10]. The assessment incorporates recent research that quantifies the contribution of fossil fuels to global air pollution levels and health impacts. Total health costs are then determined using published estimates of the disease or impact specific cost, adjusted to the level of economic output or income in each country.

Further details on the methodology are available in the report.