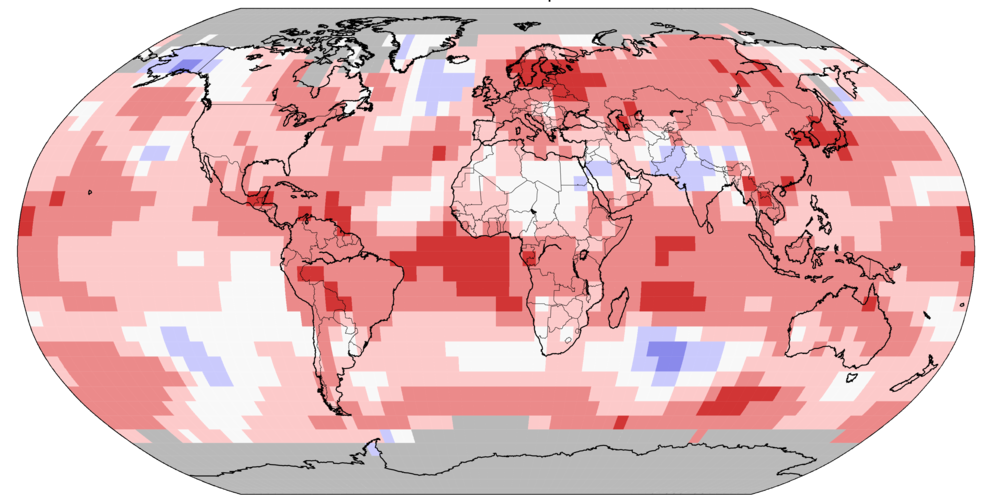 • Earth had its warmest January on record in 2020.

• Temperature departures in January were the highest ever recorded in any month without an El Niño.

• Record warmth was found in parts of Scandinavia, Asia and Central and South America.

NOAA’s report which was released last week found that global land and ocean temperatures in January were 1.14 degrees Celsius (2.05 degrees Fahrenheit) above the 20th-century average, the highest monthly temperature departure ever recorded without an El Niño present in the tropical Pacific Ocean.

Ultimately, what’s most important is not whether a given month is a fraction of a degree warmer or colder. Rather, it’s the overall trend, which continues its upward climb since the late 1970s.

January marked the 421st consecutive month and 44th straight January that global temperatures have been above average in NOAA’s database. Earth’s four warmest Januaries have occurred since 2016, and the 10 warmest have all occurred since 2002.

NOAA’s report said that record-warm temperatures were observed across parts of Scandinavia, Asia, the Indian Ocean, the Central and Western Pacific Ocean, the Atlantic Ocean and Central and South America. No land or ocean areas had a record-cold January.

South America, Europe, Asia and the Caribbean and Hawaiian regions had their second-warmest January in regional records dating back to 1910.

2020 is likely to rank among the five warmest years on record, according to a statistical analysis published by NOAA/NCEI scientists in the Bulletin of the American Meteorological Society.

Another expert analysis came to a similar conclusion about January’s global temperatures.

The Weather Company’s primary journalistic mission is to report on breaking weather news, the environment and the importance of science to our lives. This story does not necessarily represent the position of our parent company, IBM.