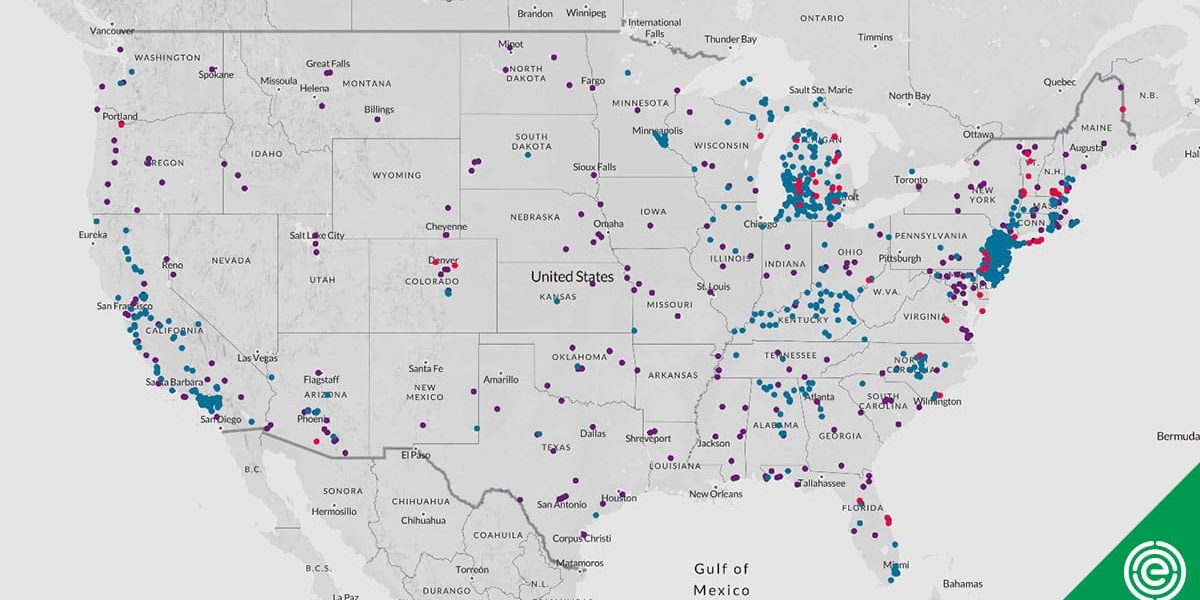 New laboratory tests commissioned by EWG have for the first time found the toxic fluorinated chemicals known as PFAS in the drinking water of dozens of U.S. cities, including major metropolitan areas. The results confirm that the number of Americans exposed to PFAS from contaminated tap water has been dramatically underestimated by previous studies, both from the Environmental Protection Agency and EWG’s own research.

Based on our tests and new academic research that found PFAS widespread in rainwater, EWG scientists now believe PFAS is likely detectable in all major water supplies in the U.S., almost certainly in all that use surface water. EWG’s tests also found chemicals from the PFAS family that are not commonly tested for in drinking water.

Of tap water samples from 44 places in 31 states and the District of Columbia, only one location had no detectable PFAS, and only two other locations had PFAS below the level that independent studies show pose risks to human health. Some of the highest PFAS levels detected were in samples from major metropolitan areas, including Miami, Philadelphia, New Orleans and the northern New Jersey suburbs of New York City.

In 34 places where EWG’s tests found PFAS, contamination has not been publicly reported by the Environmental Protection Agency or state environmental agencies. Because PFAS are not regulated, utilities that have chosen to test independently are not required to make their results public or report them to state drinking water agencies or the EPA.

EWG’s samples – collected by staff or volunteers between May and December 2019 – were analyzed by an accredited independent laboratory for 30 different PFAS chemicals, a tiny fraction of the thousands of compounds in the family of per- and polyfluoroalkyl substances. An EPA-mandated sampling program that ended in 2015 tested for only a few types of PFAS and required utilities to report only detections of a higher minimal level. The EPA also only mandated testing for systems serving more than 10,000 people, whereas EWG’s project included a sample from a smaller system excluded from the EPA program. Because of those limitations, the EPA reported finding PFAS at only seven of the locations where EWG’s tests found contamination.

In the 43 samples where PFAS was detected, the total level varied from less than 1 part per trillion, or ppt, in Seattle and Tuscaloosa, Ala., to almost 186 ppt in Brunswick County, N.C. The only sample without detectable PFAS was from Meridian, Miss., which draws its drinking water from wells more than 700 feet deep.

The samples with detectable levels of PFAS contained, on average, six or seven different compounds. One sample had 13 different PFAS at varying concentrations. The list of the 30 PFAS compounds we tested for, and the frequency with which they were detected, is detailed in the appendix.

PFAS are known as “forever chemicals” because once released into the environment they do not break down, and they build up in our blood and organs. Exposure to PFAS increases the risk of cancer, harms the development of the fetus and reduces the effectiveness of vaccines. Biomonitoring studies by the federal Centers for Disease Control and Prevention show that the blood of nearly all Americans is contaminated with PFAS.

The most notorious PFAS compounds are PFOA, formerly used by DuPont to make Teflon, and PFOS, formerly an ingredient in 3M’s Scotchgard. Those compounds have been phased out under pressure from the EPA, but they persist in drinking water, people and the environment. In EWG’s tests, PFOA was detected in 30 of 44 samples, and PFOS in 34 samples. The two compounds represented approximately a quarter of the total PFAS level in each sample.

EWG has mapped PFAS contamination of drinking water or ground water in almost 1,400 sites in 49 states. Previously, our analysis of unpublished EPA data estimates that water supplies for 110 million Americans may be contaminated with PFAS – an estimate that could be much too low, based on our new findings.

In the absence of a federal standard, states have started to set their own legal limits. New Jersey was the first to set to a maximum contaminant limit for the compound PFNA, at 13 ppt, and has proposed standards of 13 ppt for PFOS and 14 ppt for PFOA. Some other states have now set or proposed limits or guidelines for PFAS in drinking water, including California, Connecticut, Massachusetts, Michigan, Minnesota, New Hampshire, New York, North Carolina and Vermont.

EWG’s results are in sharp contrast to nationwide sampling by most public water systems mandated by the EPA between 2013 and 2015. In the EPA tests, 36 of 43 water systems tested reported no detectable PFAS, including New York, Chicago, Philadelphia, Boston and Washington, D.C. The EPA’s Unregulated Contaminant Monitoring program included only six PFAS compounds, and the minimum reporting limits were from 10 ppt to 90 ppt, obscuring the full scope of PFAS contamination.

Since the EPA program ended there has been no further nationwide testing of public water systems for PFAS. Some states, including New Jersey, Michigan, Pennsylvania and California, have conducted additional sampling and made the results public. And some local communities, including Ann Arbor, Mich., and Wilmington, N.C., regularly test for PFAS and release the results.

But other communities have been less forthcoming with PFAS test data. The Philadelphia Water Department states that it is “proactively testing for PFAS in source water and has not detected concentrations above EPA’s advisory level.” EWG’s tests of Philadelphia water show total PFAS concentrations at nearly 50 ppt.

Our results are meant to highlight the ubiquity of PFAS and the vulnerability of the nation’s drinking water supply to PFAS contamination. They underscore what an expert at the Water and Environmental Technology Center at Temple University, in Philadelphia, said about PFAS contamination: “If you sample, you will find it.”
EWG’s tests represent a single sample from each water system and may not represent what is coming out of a tap today. Results from a single sample form a snapshot of what was found in tap water at a specific site. They are likely representative of the water in the area where the sample was taken but are not intended to identify specific water systems. The cities and counties listed may be served by multiple public water systems, serving various proportions of the area’s population.

The compounds in EWG’s study are a small fraction of the entire PFAS class of thousands of different chemicals – more than 600 are in active use – including the new generation of so-called short-chain PFAS chemicals. Chemical companies claim that short-chain PFAS are safer than the long-chain predecessors they replaced, but the EPA allowed them on the market without adequate safety testing, and the new chemicals may pose even more serious problems.

A recent study by a team of scientists at Auburn University reported that short-chain PFAS are “more widely detected, more persistent and mobile in aquatic systems, and thus may pose more risks on the human and ecosystem health” than the long-chain compounds. The researchers also noted that existing drinking water treatment approaches for the removal of long-chain PFAS are less effective for short-chain PFAS. Scientists at the University of Wisconsin-Madison found PFAS, primarily the shorter-chain types, in all 37 rainwater samples they collected from around the country.

There is no simple and inexpensive technology for removing PFAS from drinking water effectively. Selecting drinking water treatment options to remove PFAS typically requires a case-by-case evaluation to identify the best option and to design and install a treatment facility.

Current options for drinking water treatment technologies to remove PFAS include granular activated carbon, ion exchange and reverse osmosis. Of these, granular activated carbon, or GAC, is the most common, with many water treatment facilities already using it to remove other contaminants. The design of the GAC filter and how often the carbon is exchanged can affect performance significantly.

Some of the systems tested already use GAC filters, including those serving Ann Arbor, Mich., and the Quad Cities, in Iowa. Reverse osmosis is the most effective technology, but it is also the most expensive. Ion exchange is a newer technology for PFAS removal, with a limited number of current installations.

The type of PFAS present, such as long- or short-chain, their concentrations and the potential presence of other contaminants all are factors that determine which treatment technology will be most effective or appropriate. Studies have shown that perfluorinated sulfonates, such as PFOS, are more effectively removed than perfluoroalkyl acids, such as PFOA, and that longer-chain PFAS are more effectively removed by GAC than shorter-chain.

Studies have demonstrated that reverse osmosis treatment is effective for removal of all types of long and shorter-chain PFAS we tested for, including PFOS, PFOA, PFBS, PFHxS, PFHxA and PFNA. This technology can also be combined with GAC to achieve higher removal rates or maintain the efficacy of the sensitive reverse osmosis membranes. However, water-treatment-plant-size reverse osmosis systems are expensive, require significant expenditures of energy and waste a lot of water, a problem in water-scarce areas.

Operating and maintenance costs are also important components to consider as part of the design of a long-term treatment plant, as are options for the disposal of PFAS removed from drinking water. Identifying safe ways to dispose of “forever chemicals” creates a new set of challenges. Once loaded with PFAS, GAC and ion exchange resins require disposal and could end up in incinerators or landfills and create contamination issues for local communities. PFAS-loaded wastewater produced from reverse osmosis must be treated before disposal.