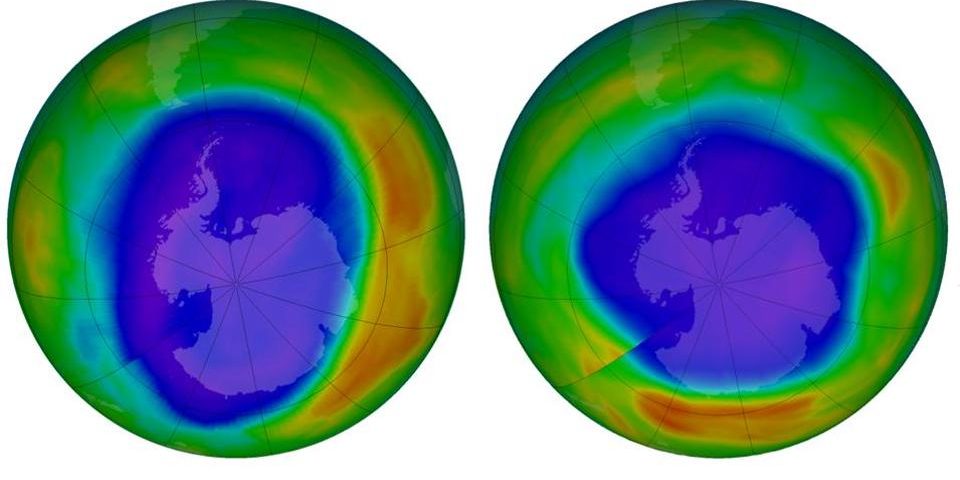 The quadrennial review from the Scientific Assessment Panel of the Montreal Protocol will be presented here at the 30th Meeting of the Parties to this historic accord. Its findings confirm first and foremost that actions taken under the Montreal Protocol have led to long-term decreases in the atmospheric abundance of controlled ozone-depleting substances (ODSs) and the ongoing recovery of stratospheric ozone.

Evidence presented by the authors shows that the ozone layer in parts of the stratosphere has recovered at a rate of 1-3% per decade since 2000. At projected rates, Northern Hemisphere and mid-latitude ozone is scheduled to heal completely by the 2030s followed by the Southern Hemisphere in the 2050s and polar regions by 2060. The ozone layer protects life on Earth from harmful levels of ultraviolet rays from the sun.

It is further evidence of the inspiring success of this environmental treaty now entering its fourth decade. The report also offers a view of the role the Protocol must have in decades to come.

“The Montreal Protocol is one of the most successful multilateral agreements in history for a reason,” said Erik Solheim, head of UN Environment. “The careful mix of authoritative science and collaborative action that has defined the Protocol for more than 30 years and was set to heal our ozone layer is precisely why the Kigali Amendment holds such promise for climate action in future.”

Set to enter in to force on 1 January 2019, the Kigali Amendment calls for slashing the future use of powerful climate-warming gases in refrigerators, air conditioners and related products. Nations that ratify the Kigali Amendment are committing to cutting the projected production and consumption of these gases, known as hydrofluorocarbons (HFCs), by more than 80 percent. So far, 58 parties have done so.

Authors of the Assessment found the world can avoid up to 0.5°C of global warming this century through implementation of the Kigali Amendment, affirming its critical role in keeping global temperature rise below the 2°C mark.

“These new assessment results highlight the importance of continued long-term monitoring of HFCs in the atmosphere as the Kigali Amendment begins to take hold,” said David Fahey, Co-Chair of the Montreal Protocol Scientific Assessment Panel and scientist at the NOAA Earth System Research Laboratory in the US.

Full compliance would reduce future global warming due to HFCs by about 50% between now and 2050 compared to a scenario without any HFC controls.

The findings come at a time when the world is still grappling with a sobering message from the Intergovernmental Panel on Climate Change (IPCC) which found just 12 years remain to limit global warming to 1.5°C, beyond which, the impacts of a further rise in global temperatures will begin to have an increasingly extreme impact on human society and ecosystems. The IPCC report offered the clearest evidence to date of the drastic difference between the 1.5°C and 2°C scenarios.

“Carbon dioxide emissions remain by far the most important greenhouse gases which are driving global warming. But we can also help tackle climate change by reducing our commitment to other gases including HFCs. Every bit of warming matters,” said World Meteorological Organization Secretary-General Petteri Taalas.

The Assessment, which is intended to add to the scientific basis for decisions made by the Parties to the Montreal Protocol, also presents updated scenarios for hastening ozone recovery through:

About the Scientific Assessment of Ozone Depletion

The 2018 Assessment is the latest in a series of assessments prepared by the world’s leading experts in the atmospheric sciences and under the auspices of the Montreal Protocol in coordination with the World Meteorological Organization (WMO) and the United Nations Environment Programme (UN Environment). The 2018 Assessment is the ninth in the series of major assessments that have been prepared by the Scientific Assessment Panel as direct input to the Montreal Protocol process.

UN Environment is the leading global voice on the environment. It provides leadership and encourages partnership in caring for the environment by inspiring, informing, and enabling nations and peoples to improve their quality of life without compromising that of future generations. UN Environment works with governments, the private sector, civil society and with other UN entities and international organizations across the world.

WMO is a specialized agency of the United Nations (UN) with 191 Member States and Territories. It is the UN system’s authoritative voice on the state and behaviour of the Earth’s atmosphere, its interaction with the land and oceans, the weather and climate it produces and the resulting distribution of water resources.