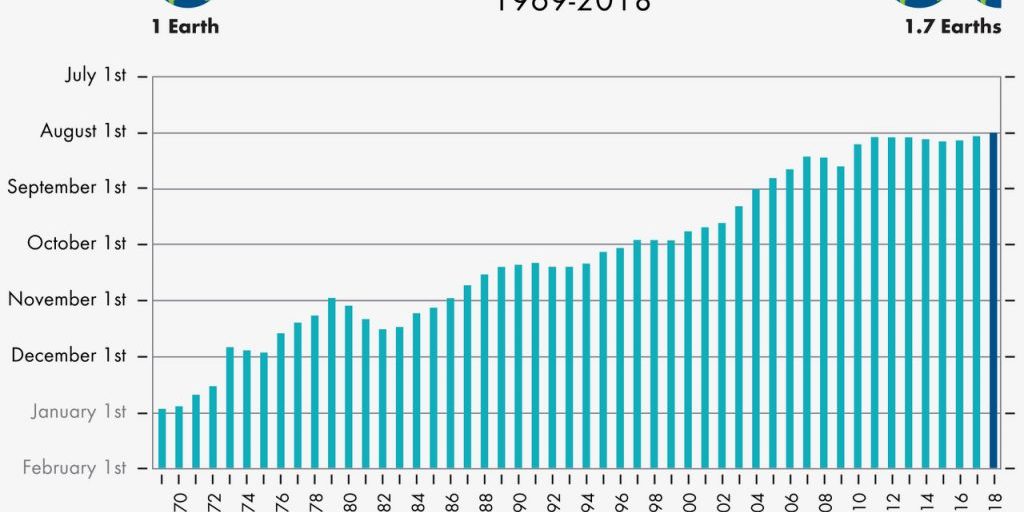 On August 1 humanity used nature’s resource budget for the entire year, according to Global Footprint Network, an international research organization. This date is called Earth Overshoot Day—the date when humanity’s annual demand on nature exceeds what Earth’s ecosystems can renew in that year.

In other words, humanity is currently using nature 1.7 times faster than our planet’s ecosystems can regenerate. This is akin to using 1.7 Earths.

Global Footprint Network calculates Earth Overshoot Day every year using Ecological Footprint accounting, which adds up all of people’s competing demands on nature, including demand for food, timber, and fibers (cotton); absorption of carbon emissions from burning fossil fuels; and buildings, roads and other infrastructure. August 1 is the earliest Earth Overshoot Day since the world went into ecological overshoot in the 1970s.

The costs of this ecological overspending include deforestation; collapsing fisheries; fresh-water scarcity; soil erosion; biodiversity loss; and the buildup of carbon dioxide in the atmosphere, leading to climate change and more severe droughts, wildfires, and hurricanes. These threats can produce desperation and force many people to migrate to cities or other countries.

“As we mark Earth Overshoot Day, today may seem no different from yesterday—you still have the same food in your refrigerator,” said Global Footprint Network CEO Mathis Wackernagel. “But fires are raging in the Western United States. On the other side of the world, residents in Cape Town have had to slash water consumption in half since 2015. These are consequences of busting the ecological budget of our one and only planet.”

“Our economies are running a Ponzi scheme with our planet. We are using the Earth’s future resources to operate in the present and digging ourselves deeper into ecological debt,” Wackernagel continued. “It’s time to end this ecological Ponzi scheme and leverage our creativity and ingenuity to create a prosperous future free of fossil fuels and planetary destruction.”
Global Footprint Network has identified four solution areas with the most potential to address ecological overshoot:

• Cities: If we reduce driving by 50% around the world and replace one-third of car miles with public transportation and the rest by walking and biking, we can #MoveTheDate of Overshoot Day back 12 days.

• Energy: Reducing the carbon component of humanity’s Ecological Footprint by 50% would #MoveTheDate 93 days.

• Food: If everyone in the world cut food waste in half, reduced the Footprint intensity of their diets, and consumed world-average calories, we would #MoveTheDate 38 days.

• Population: If every other family in the world had one less child, we would move Overshoot Day 30 days by 2050.

Global Footprint Network is inviting individuals to participate in Earth Overshoot Day by determining their own Personal Overshoot Day and Ecological Footprint at www.footprintcalculator.org and taking a “Step to #MoveTheDate” at www.overshootday.org/steps-to-movethedate.

Although 86 percent of the world’s population lives in a country with an ecological deficit, the latest national Ecological Footprint data reveals some encouraging signs for moving back Earth Overshoot Day.

Global Footprint Network is changing how the world manages its natural resources and responds to climate change, through

• METRICS that are simple, meaningful, and scalable;

• ACTIONABLE INSIGHTS about natural resource consumption and capacity; and