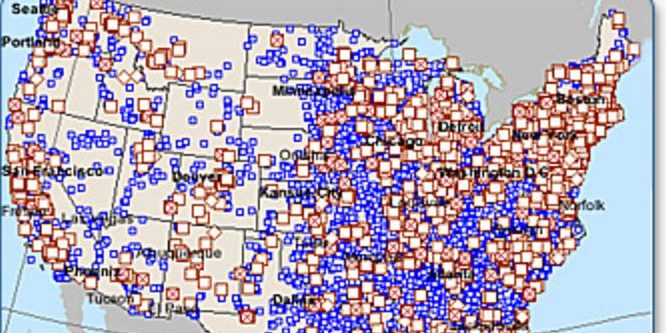 TOXMAP® is a Geographic Information System (GIS) from the Division of Specialized Information Services of the US National Library of Medicine® (NLM) that uses maps of the United States and Canada to help users visually explore data primarily from the US Environmental Protection Agency (EPA)’s Toxics Release Inventory (TRI) and Superfund Program.

There are two versions of TOXMAP: the beta (or pre-release) of a Flash-based version, and TOXMAP classic. This FAQ will help you decide which version of TOXMAP to use.

TOXMAP’s chemical and environmental health information is taken from LM’s TOXNET® and PubMed®, and from other authoritative sources.

Federal law requires facilities in certain industries, which manufacture, process, or use significant amounts of toxic chemicals, to report annually on their releases of these chemicals to the EPA TRI Program. Superfund sites are those throughout the United States and its territories which contain substances that are either designated as hazardous under the Comprehensive Environmental Response, Compensation, and Liability Act (CERCLA), or identified as such under other laws.

Two versions of TOXMAP are available: the classic version of TOXMAP released in 2004, and a version based on Adobe® Flash/Flex technology. In addition to many of the features of TOXMAP classic, this version provides an improved map appearance and interactive capabilities as well as a more current GIS look-and-feel. This includes seamless panning, immediate update of search results when zooming to a location, two collapsible side panels to maximize map size, and automatic size adjustment after a window resize. The new TOXMAP also has improved U.S. Census layers and availability by Census Tract (2000 and 2010), Canadian National Pollutant Release Inventory (NPRI) data, U.S. EPA coal plant emissions data, U.S. commercial nuclear power plants, and improved and updated congressional district boundaries. Both versions of TOXMAP can be accessed from https://toxmap.nlm.nih.gov.

TOXMAP classic users can search the system by location (such as city, state, or ZIP code), chemical name, chemical name fragment, release medium, release amount, facility name and ID, and can filter results to those residing within a pre-defined or custom geographic region. Search results can be saved for use in other tools, and can also be viewed in Google Maps® and Google Earth®. Both versions of TOXMAP also overlay map data such as U.S. Census population information, income figures from the Bureau of Economic Analysis, and health data from the National Cancer Institute and the National Center for Health Statistics.

NLM has an extensive collection of toxicology and environmental health references (TOXLINE®), as well as a rich resource of data on hazardous chemical substances (HSDB®) in the TOXNET® databases. These resources are easily linked to/from the TOXMAP search results. The data shown in TOXMAP comes from:

The effect a chemical has on a living organism– if any– is called the organism’s response. The response is related to the chemical dose and to the resulting concentration of the chemical in the organism. The dose of a chemical often determines the extent of the effect it produces. Understanding the dose-response relationship is necessary for understanding the cause and effect relationship between chemical exposure and illness.

The toxicity of a substance depends on many factors: the form and chemical activity; the dosage, especially the dose-time relationship; exposure route; species; age; sex; ability of the chemical to be absorbed; metabolism; distribution within the body; excretion; and the presence of other chemicals.
The variety of responses among organisms that get the same dose of chemical is due to individual susceptibility. Dose and individual susceptibility play roles in all situations involving chemical exposure. Toxicologists study responses of living organisms to doses of chemicals.

Always keep in mind that the co-occurrence of a substance and a particular health problem does not by itself imply an effect on human health by that substance; the association of two or more variables (correlation) does not, by itself, imply a cause and effect relationship.