The State of World Fisheries and Aquaculture 2020 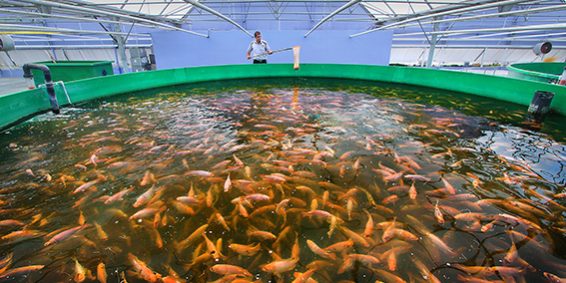 Worldwide per capita fish consumption has reached a new record of 20.5 kilograms per year and is poised to increase further in the decade ahead, underscoring its critical role in global food and nutrition security. Sustainable aquaculture development and effective fisheries management are critical to maintain these trends, according to a new report from the Food and Agriculture Organization of the United Nations.

Total fish production is set to increase to 204 million tonnes in 2030, up 15 percent from 2018, with aquaculture’s share growing from its current 46 percent according to The State of World Fisheries and Aquaculture (SOFIA). That growth is around half the increase recorded in the previous decade, and translates into an annual per capita fish food consumption is forecast to reach 21.5 kilograms by 2030.

“Fish and fisheries products are recognized not only as some of the healthiest foods on the planet but also as some of the less impactful on the natural environment,” says FAO Director-General QU Dongyu, emphasizing that they must play a more central role in food security and nutrition strategies at all levels.

The Director-General also pointed to SOFIA’s reporting of growing evidence that while effective fisheries management results in robust or rebuilding of fish stocks, failure to implement these measures threaten their contributions to food security and livelihoods. The underlying reasons for sustainability failures are complex and need tailored solutions.

Some 34.2 percent of fish stocks are now fished at biologically unsustainable levels, according to SOFIA’s benchmark analysis. That overall measure is too high, and is not globally improving, although it’s welcome to know that 78.7 percent of all fish landed come from biologically sustainable stocks.

Furthermore, sustainability trends for many major species are improving. Catches of all kinds of tuna reached their highest level, about 7.9 million tonnes in 2018, and two thirds of the these stocks are now fished at biologically sustainable levels, a sharp increase of 10 percentage points in just two years, testament to intensive fisheries management in a sector marked by a high-value commodity and by significant overcapacity among some fleets.

“The improvement, the fruit of contributions from many stakeholders, attest to the importance of active management to reach and maintain biological sustainability, and serves to underscore how urgently we must replicate such approaches in fisheries and regions where management systems are in poor shape,” said Manuel Barange, Director of the FAO Fisheries and Aquaculture Department. “Not surprisingly, we notice that sustainability is particularly difficult in places where hunger, poverty and conflict exist, but there is no alternative to sustainable solutions.”

While SOFIA is based on information before COVID-19, the baseline information it provides is already helping FAO respond with technical solutions and targeted interventions for fisheries and agriculture, which the Director-General noted is one of the sectors most impacted by the pandemic.

Global fishing activity may have declined by around 6.5 percent as a result of restrictions and labor shortages due to the health emergency, according to an addendum to SOFIA published by FAO.

The disruption of international transport has impacted particularly on aquaculture production for export, while greatly reduced tourism and restaurant closures have dramatically impacted distribution channels for many fish types, although retail sales have remained stable or increased for frozen, canned, marinated and smoked fish with a longer shelf life. In parts of the Mediterranean and the Black Sea, more than 90 percent of small-scale fishers have been forced to stop due to an inability to sell their catches, often exacerbated by falling prices.

Input markets, migrant labor issues and risks linked to crowded fresh markets all impact fisheries output and consumption, with informal supply chains under greater stress due to the absence of contractual relationships and established cold chains. FAO has been primarily focused on supporting, restarting and strengthening the sector’s supply chains and livelihoods, with priority attention for the most vulnerable groups and regions.

The SOFIA report has tomes of fishing data organized by species, regions and whether they are captured wild or farmed.

Global fish production is estimated to have reached about 179 million tonnes in 2018, with a total first sale value estimated at $401 billion. Aquaculture products accounted for 46 percent of total production and 52 percent of fish for human consumption. China is by far the largest producer, buoyed by its highly-developed aquaculture industry, which has produced more farmed aquatic food than the rest of the world combined since 1991.

Aquaculture’s expansion will continue, although at a slower rate, and farmed fish will contribute to a growing share of consumption and trade over the next decade, according to SOFIA. Aquaculture output is expected to grow by 48 percent in Africa, contributing to mitigate an expected population-driven reduction in per capita fish consumption on the continent.

Anchoveta was the top species for marine capture, buoyed by a strong production rebound in Peru and Chile, while Alaska pollock and skipjack tuna were next. Inland capture fisheries – a significant source of food in many food-limited countries- reached the highest level ever reported, at 12 million tonnes.

Fish consumption accounts for one-sixth of the global population’s intake of animal proteins, and more than half in countries such as Bangladesh, Cambodia, the Gambia, Ghana, Indonesia, Sierra Leone, Sri Lanka and several small island developing States (SIDS).

The significant dietary values of fish galvanize the importance of aquaculture development, especially in Africa, and of harness strategies to help it intensify production sustainably using innovative techniques in the areas of feeds, genetic selection, biosecurity and business developments, FAO’s Director-General emphasizes, noting that FAO’s Hand-in-Hand Initiative is “an ideal framework for efforts that combine fisheries and aquaculture trends and challenges in the context of blue growth.”

The FAO report has a section on sustainability initiatives to mark the 25th anniversary of the Code of Conduct for Responsible Fisheries, and also notes that FAO and a host of partners are collaborating on the Illuminating Hidden Harvests project, a global study that will be released in late 2020 and aims to support policies in favor of productive, sustainable and equitable small-scale fisheries, which can and do provide essential nutrition to billions and livelihoods and jobs for the vast majority of the 120 million people who depend on capture fisheries.


Key numbers from The State of World Fisheries and Aquaculture 2020

-Share of that from marine capture fisheries: 84.4 million tonnes

-Amount of production consumed by humans as food: 156 million tonnes

-First-sale value of all fisheries and aquaculture production in 2018: $401 billion

-Number of people employed in the primary sector of fisheries and aquaculture: 59.5 million, of whom 14% are women

-Region with the most fishers and fish farmers: Asia (85% of the total)

-Number of fishing vessels on the planet: 4.56 million

-Largest fleet by region: Asia (3.1 million vessels, or 68% of the global fleet)

-Share of motorized vessels less than 12 meters in length: 82%