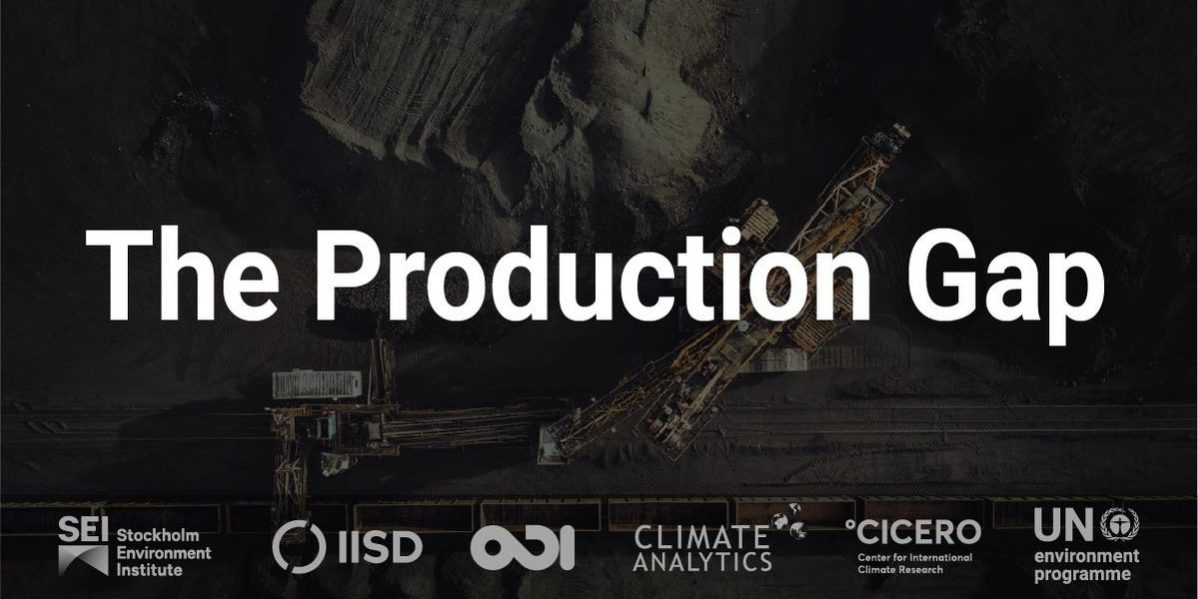 The new Production Gap Report — produced by SEI, IISD, ODI, CICERO, Climate Analytics and the UN Environment Programme — shows that the world is on track to produce 120% more fossil fuels than can be burned under 1.5°C warming.

The world is awash in fossil fuels. From the vast reservoirs of oil and gas in North America to the sweeping coal fields of Australia, there is no shortage of fossilized carbon to burn. Coal, oil, and gas have a long history of providing exceptionally concentrated, ready-made energy, often at low and subsidized prices that do not reflect their full societal and environmental costs; it is no wonder they have powered the planet for more than a century.

But citizens, businesses, and political leaders are now starting to turn elsewhere for their energy needs. Energy from the wind and sun is becoming ever easier and cheaper to gather and store, providing the first real threat to fossil fuel dominance. This trend is emerging not a moment too soon, given the mounting climate change crisis, borne mostly from decades of burning fossil fuels.

As fast as renewable and other climate-compatible energy technologies are rising, however, there is no guarantee that fossil fuels and their greenhouse gas (GHG) emissions will decline — let alone at the pace needed to avoid dangerous climate change. The continued drive to increase fossil fuel production throughout the world only makes that harder.

Governments not only play central roles in the permitting of exploration and production; they also support the fossil fuel industry through direct investments, research and development funding, tax expenditures, and assumed liability and risk. Fossil fuel subsidies span all stages of the fossil fuel production process, from research, development, and exploration, to operations, transport, processing, marketing, decommissioning, and site remediation.

The Production Gap Report reviews specific production plans, outlooks, and support mechanisms in 10 key countries. It finds that many countries appear to be banking on export markets to justify major increases in production (e.g., the United States, Russia, and Canada) while others are seeking to limit or largely end imports through scaled-up production (e.g., India and China). The net result could be significant over-investment, increasing the risk of stranded assets, workers, and communities, as well as locking in a higher emissions trajectory.

To help close the production gap, countries would benefit from new models of addressing fossil fuel supply. Though most countries focus exclusively on the “demand side” — with policies that aim to boost renewable energy, energy efficiency, and other low-carbon technologies — some governments have also begun to enact “supply-side” measures that aim to limit fossil fuel production. A range of policy options can help governments align their fossil fuel development plans and policies with climate goals, including:

• economic instruments (such as subsidy reform);
• regulatory approaches (such as banning new extraction permits);
• government provision of goods and services (such as just transition plans); and
• measures to enhance information and transparency (such as national reporting of fossil fuel production and targets).

The governments of Belize, Costa Rica, France, Denmark, and New Zealand have all enacted partial or total bans or moratoria on oil and gas exploration and extraction, while Germany and Spain are phasing out coal extraction. Local governments, companies, investors, trade unions, and civil society organizations can also accelerate a transition away from fossil fuels, by mobilizing constituencies and shifting investment to lower-carbon options. For example, individuals and institutions have already pledged to divest over USD 11 trillion from fossil fuel holdings.

The key role of international cooperation

The UN climate process and other international institutions and initiatives can help catalyze supply-side ambition and action. Measures to move away from fossil fuel production are more effective when countries adopt them together, and international cooperation can send a clear signal to policymakers, investors, consumers, and civil society that the world is shifting towards a low-carbon future.

The Paris Agreement provides key opportunities for countries to report their fossil fuel production and their plans and strategies to align future production with climate goals, including through the global stock-take, NDCs, long-term low greenhouse gas emission development strategies, and financing.

Countries that have already begun to wind down fossil fuel production can help other countries learn from their experiences. International financing institutions can accelerate the transition by shifting financial support away from fossil fuel production and towards low-carbon solutions. And, drawing inspiration from models such as the Powering Past Coal Alliance, coalitions of leading actors can work together to raise ambition through joint targets and actions that align future fossil fuel production with global climate goals.