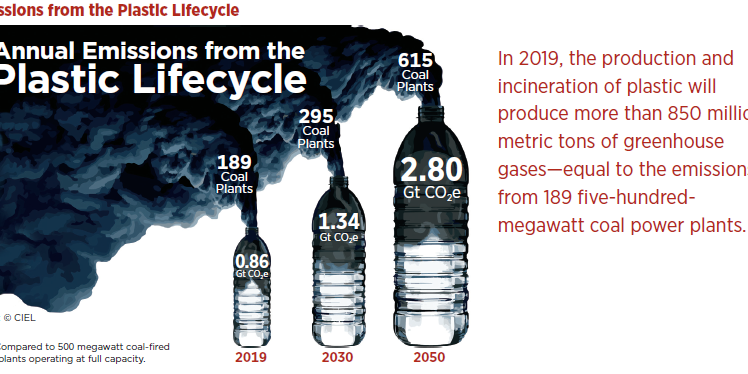 In 2019 alone, the production and incineration of plastic will add more than 850 million metric tons of greenhouse gases to the atmosphere—equal to the pollution from 189 new 500-megawatt coal-fired power plants, according to a new report, Plastic & Climate: The Hidden Costs of a Plastic Planet. The rapid global growth of the plastic industry—fueled by cheap natural gas from hydraulic fracturing—is not only destroying the environment and endangering human health but also undermining efforts to reduce carbon pollution and prevent climate catastrophe.

This is the conclusion of a sweeping new study of the global environmental impact of the plastic industry by the Center for International Environmental Law, Environmental Integrity Project, FracTracker Alliance, Global Alliance for Incinerator Alternatives, 5 Gyres, and Break Free From Plastic.

The new report gathers research on the greenhouse gas emissions of plastic at each stage of the plastic lifecycle—from its birth as fossil fuels through refining and manufacture to the massive emissions at (and after) plastic’s useful life ends—to create the most comprehensive review to date of the climate impacts of plastic.

With the ongoing, rapid expansion of the plastic and petrochemical industries, the climate impacts of plastic are poised to accelerate dramatically in the coming decade, threatening the ability of the global community to keep global temperature rise below 1.5°C degrees. If plastic production and use grow as currently planned, by 2030, emissions could reach 1.34 gigatons per year—equivalent to the emissions released by more than 295 500-megawatt coal power plants. By 2050, the production and disposal of plastic could generate 56 gigatons of emissions, as much as 14 percent of the earth’s entire remaining carbon budget.

The rapid growth of the industry over the last decade, driven by cheap natural gas from the hydraulic fracturing boom, has been most dramatic in the United States, which is witnessing a dramatic buildout of new plastic infrastructure in the Gulf Coast and in the Ohio River Valley.

For example, in western Pennsylvania, a new Shell natural gas products processing plant being constructed to provide ingredients for the plastics industry (called an “ethane cracker”) could emit up to 2.25 million tons of greenhouse gas pollution each year (carbon dioxide equivalent tons). A new ethylene plant at ExxonMobil’s Baytown refinery along the Texas Gulf Coast will release up to 1.4 million tons, according to the Plastic and Climate report. Annual emissions from just these two new facilities would be equal to adding almost 800,000 new cars to the road. Yet they are only two among more than 300 new petrochemical projects being built in the US alone, primarily for the production of plastic and plastic additives.

Plastic in the environment is one of the least studied sources of emissions—and a key missing piece from previous studies on plastic’s climate impacts. Oceans absorb a significant amount of the greenhouse gases produced on the planet—as much as 40 percent of all human-produced carbon dioxide since the beginning of the industrial era. Plastic & Climate highlights how a small but growing body of research suggests plastic discarded in the environment may be disrupting the ocean’s natural ability to absorb and sequester carbon dioxide. Plastic & Climate uses conservative assumptions to create a projection of plastic’s climate impacts under a business-as-usual scenario, meaning that the actual climate impacts of plastic are likely to exceed these projections.

The report identifies a series of actions that can be taken to reduce these climate impacts, concluding that the most effective way to address the plastic crisis is to dramatically reduce the production of unnecessary plastic, beginning with national and global bans on nearly all single-use, disposable plastic.

The proposed solutions include:

• ending the production and use of single-use, disposable plastic;
• stopping development of new oil, gas, and petrochemical infrastructure;
• fostering the transition to zero-waste communities;
• implementing extended producer responsibility as a critical component of circular economies; and
• adopting and enforcing ambitious targets to reduce greenhouse gas emissions from all sectors, including plastic production.

Quotes From the Authors

“Humanity has less than twelve years to cut global greenhouse emissions in half and just three decades to eliminate them almost entirely. The massive and rapidly growing emissions from plastic production and disposal undermine that goal and jeopardize global efforts to keep climate change below 1.5 degrees of warming. It has long been clear that plastic threatens the global environment and puts human health at risk. This report demonstrates that plastic, like the rest of the fossil economy, is putting the climate at risk as well. Because the drivers of the climate crisis and the plastic crisis are closely linked, so to are their solutions: humanity must end its reliance on fossil fuels and on fossil plastics that the planet can no longer afford.”

“Our world is drowning in plastic, and the plastics industry has been overlooked as a major source of greenhouse gases. But there are ways to solve this problem. We need to end the production of single use, disposable plastic containers and encourage a transition to a zero-waste future.”

“The overwhelming majority of plastics are produced from ethane, a component of natural gas and petroleum. The story of plastic’s contribution to climate change really begins at the wellhead, and we can therefore say that a portion of carbon emissions from oil and gas production is attributable to the creation of plastics. As gas travels from hundreds of thousands of wells through a network of millions of miles of pipelines on its way to downstream facilities, there are countless releases of carbon through leaks, venting, and flaring, mostly in the form of carbon dioxide and methane. But in order to get a full picture of these impacts, we have also examined emissions from trucks and heavy machinery that service this gigantic industry, as well as the removal of vast stretches of forested land, which can no longer ameliorate the carbon pollution of the industry. At a time when atmospheric carbon dioxide is spiking dramatically, we need to take a hard look at the consequences of extracting carbon from the ground in the first place, including for the production of plastics.”

“There is no such thing as an “end-of-life” for plastic as it continues to pose a significant threat to the climate long after it reaches the final phase of its lifecycle. Waste incineration, also referred to as Waste-to-Energy, is the primary source of greenhouse gas emissions from plastic waste management, even after considering the electricity that can be generated during the process. The industry’s plans to massively expand both petrochemical production and waste incineration are incompatible with the urgent need for climate mitigation. Our analysis evidently shows that waste prevention coupled with reduced plastic production is by far the most effective way to reduce GHG emissions, and practically the only path forward in order to turn the tide on ever-intensifying climate change.”

5 Gyres’ collaboration on the CIEL Plastics & Climate report helps explain the possible greenhouse gas impacts of ocean plastics, including potentially accelerated greenhouse gas emissions from microplastics, and the impact of plastics on CO2 uptake by ocean ecosystems. This was a novel subject for 5 Gyres despite our expertise of ocean plastics, and given that only one scientific publication to this date has looked at ocean plastic greenhouse gas emissions. During the 10 years of research in ocean plastic pollution, we have observed the evolution of our understanding of this issue. Now more than ever, we have seen a shift in attention towards understanding the sources of ocean plastics before entering the ocean. The underlying belief of 5 Gyres is that we must stop the flow of plastic pollution from source to sea – which suggests that its time we start ranking today’s proposed solutions which can be found in this report. CIEL has courageously taken initiative to include us, bridging the conversation of the upstream plastic production impacts until its “end-of life” – from those floating at sea, sitting on our shorelines, or resting on the seafloor.

“Both the climate emergency and the plastic pollution crisis are driven by fossil fuel dependence. It is therefore not surprising that the continuing production, use, and disposal of plastics will further exacerbate the climate crisis. Simply put, more throwaway plastic translates to runaway climate change. The production of plastics must be significantly curtailed for humanity to have a real, fighting chance in averting catastrophic climate change while reversing the plastic pollution crisis at the same time.”