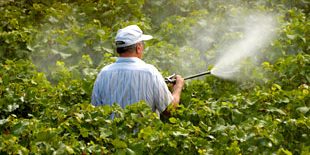 On October 24 leading toxics experts released a scientific paper in the journal PLOS Medicine warning of the dangers widely-used agricultural pesticides pose to children’s health and development. The authors found that exposure to organophosphate pesticides, even at low levels previously considered safe, can lead to cognitive problems in children, like reduced IQ, developmental delays and increased risk of learning disabilities.

The U.S. Environmental Protection Agency (EPA) under President Trump is ignoring clear science behind the danger of such pesticides. EPA scientists and scientific advisors have reported strong evidence that supports a ban on the organophosphate pesticide chlorpyrifos, leading a federal appeals court to rule in August that the EPA must ban chlorpyrifos, but the Trump Administration just announced last month that it will appeal the court’s ruling. Based on a review by its own scientists, the EPA originally proposed to ban chlorpyrifos in 2016, which was subsequently reversed in 2017 under President Trump. The court’s decision to order the chlorpyrifos ban was due to “scientific evidence that its residue on food causes neurodevelopmental damage to children.”

“Children deserve to be healthy and safe from exposure to toxic chemicals. We have compelling evidence from dozens of human studies that exposures of pregnant women to very low levels of organophosphate pesticides put children and fetuses at risk for developmental problems that may last a lifetime.” said Irva Hertz-Picciotto, the paper’s lead author, director of the UC Davis Environmental Health Sciences Center and co-director of Project TENDR (Targeting Environmental Neuro-Development Risks). “Current U.S. EPA policy is failing to protect children and fetuses here in the U.S. from these dangerous chemicals. By law, the EPA cannot ignore such clear findings: It’s time for a ban not just on chlorpyrifos, but all organophosphate pesticides.”

“We found no evidence of a safe level of organophosphate pesticide exposure for children. Well before birth, organophosphate pesticides are disrupting the brain in its earliest stages, putting them on track for difficulties in learning, memory and attention, effects which may not appear until they reach school-age,” said Bruce Lanphear, one of the paper’s co-authors and a physician-scientist at Simon Fraser University in Vancouver, British Columbia. “Government officials around the world need to listen to science, not chemical lobbyists, and protect our children from chlorpyrifos and all organophosphate pesticides.”

The authors also lay out a set of recommendations that, if implemented, could result in substantial reductions in the pesticide burden to individuals. Besides eliminating use of these pesticides in agriculture, the recommendations call for removing them from non-agricultural uses and products, proactively monitoring sources of drinking water, and establishing a program for reporting of pesticide use and illnesses. Additional recommendations are for greater medical education on the risks from organophosphate pesticides so that health providers understand how to treat pesticide poisonings and can educate their patients on ways to avoid pesticide exposures; and for agricultural entities to train their workers using appropriate languages in the proper handling and application of pesticides, and to increase the use of less toxic alternatives and move towards sustainable pest control measures.

“Exposure of children and pregnant women to these toxic pesticides can have significant and long-lasting effects,” said Jeanne Conry, past president the American College of Obstetricians and Gynecologists, and president-elect of the International Federation of Gynecology and Obstetrics.

“Health care professionals are on the front line of responding to organophosphate pesticide exposure, but the only way to make sure families aren’t exposed in the first place is to ban them completely.”

“Alternatives to these toxic pesticides exist, and many farmers have successfully eliminated use of organophosphate pesticides. The agricultural community has a responsibility to use these alternatives.

We need federal support for research on less toxic pest management and support to our farmers so they can farm sustainably and profitably, as well as alternatives to organophosphate use to control mosquitos and other public health threats,” said Asa Bradman, environmental health scientist at UC Berkeley and co-author of the paper. “Agriculture must also do a better job of protecting farm workers and their families from exposure, by making sure they have the training and equipment necessary to prevent exposure to organophosphate pesticides.”

The paper’s authors include:

CERCH (The Center for Environmental Research and Children’s Health)

The Natural Resources Defense Council (NRDC) is an international nonprofit environmental organization with more than 3 million members and online activists. Since 1970, our lawyers, scientists, and other environmental specialists have worked to protect the world’s natural resources, public health, and the environment. NRDC has offices in New York City, Washington, D.C., Los Angeles, San Francisco, Chicago, Bozeman, MT, and Beijing. Visit us at www.nrdc.org and follow us on Twitter @NRDC.