Over 90% of sampled salt brands globally found to contain microplastics 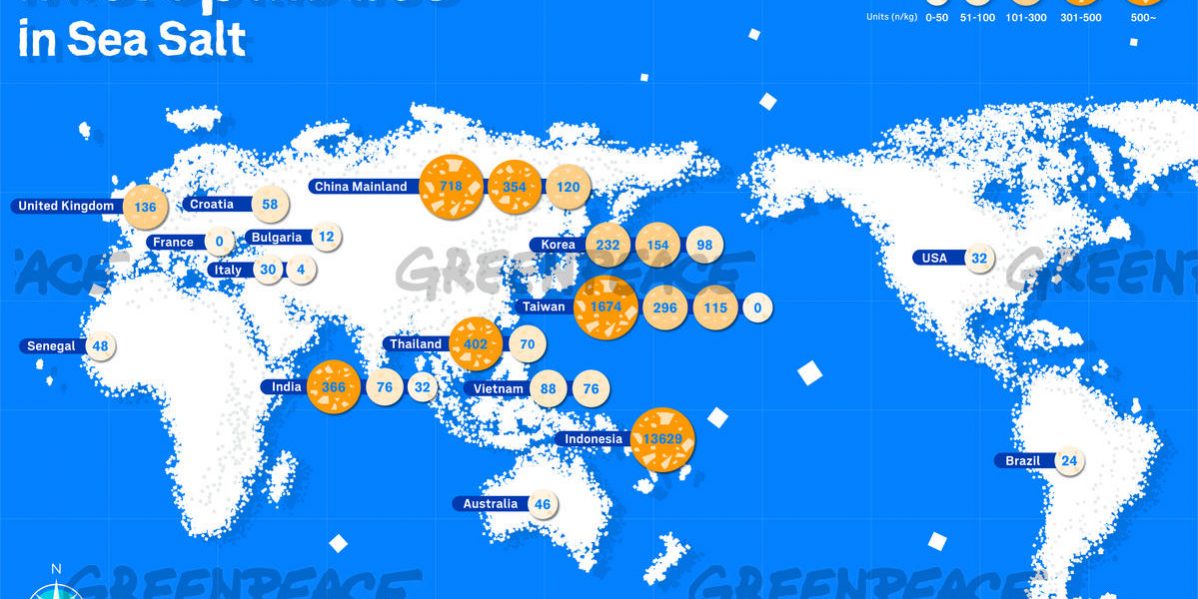 Over 90% of sampled salt brands globally were found to contain microplastics, with the highest number coming from salt sourced in Asia, according to a new study co-designed by Kim, Seung-Kyu, Professor at Incheon University and Greenpeace East Asia.[1]

The study, which has been published in Environmental Science & Technology, a peer-reviewed scientific journal, analyzed 39 various salt brands globally, showing that plastic contamination in sea salt was highest, followed by lake salt, then rock salt – an indicator of the levels of plastic pollution in the areas where the salt was sourced.[2] Only three of the salt brands studied did not contain any microplastic particles in the replicated samples.[3]

“Recent studies have found plastics in seafood, wildlife, tap water, and now in salt. It’s clear that there is no escape from this plastics crisis, especially as it continues to leak into our waterways and oceans,” said Mikyoung Kim, Campaigner at Greenpeace East Asia. “We need to stop plastic pollution at its source. For the health of people and our environment, it’s incredibly important that corporations reduce their reliance on throwaway plastics immediately.”

Building on previous studies of microplastic pollution in salt, this research is the first of its scale to look at contaminant levels of the geographical spread of sea salt, and its correlation with environmental discharge and pollution levels of plastics.

The study highlights Asia as a hotspot for global plastic pollution meaning that the ecosystem and human health in Asian marginal seas could potentially be at greater risk because of severe maritime microplastics pollution. In one Indonesian sea salt sample, researchers found the highest quantities of microplastics. The country is considered to be the second worst plastic emitter into the world’s oceans.[4]

“The findings suggest that human ingestion of microplastics via marine products is strongly related to plastic emissions in a given region,” said Professor Kim, Seung-Kyu, corresponding author of the study. “In order to limit our exposure to microplastics, preventative measures are required, such as controlling the environmental discharge of mismanaged plastics and more importantly, reducing plastic waste” he added.

Earlier this month, Greenpeace along with the Break Free From Plastic coalition released a report naming Coca-Cola, PepsiCo, and Nestlé as among the most frequent companies whose packaging relies on the single-use plastics that pollute our oceans and waterways globally.[6]

[5] Microplastic content varies dramatically among different brand of salts and is especially high in those consumed in Asia. Based on an average microplastic content of 506 MP/kg for all salt samples including an Indonesian outlier sample, it’s estimated that an average adult consumes approximately 2,000 MPs per year through salt.

[6] Break Free From Plastic is a global movement envisioning a future free from plastic pollution.