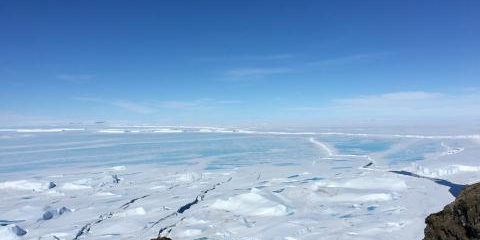 A new study finds that when Antarctica’s massive ice shelves lack a protective buffer of sea ice, ocean swells from the north flex the shelves and can weaken their stabilizing seaward edge. Regular inundation by summer meltwater as the seaward edge breaks away can also contribute to rapid ice shelf disintegration.

“Sea ice here acts like the bumpers on a car—with the bumpers in place, the car can take a shock and not be damaged. Take them off, and every hit adds up,” said Ted Scambos, study co-author and senior research scientist at the National Snow and Ice Data Center at the University of Colorado Boulder.
Ice shelves are thick plates of ice, fed by tributary glaciers. They are floating seaward extensions of the grounded ice sheet.

Since 1995, three large ice shelves on the Antarctic Peninsula—the Larsen A, Larsen B, and Wilkins—have suddenly and dramatically disintegrated.

Happening over a few weeks, or sometimes only a few days, the ice shelf disintegrations mark an unprecedented departure from the more typical and natural recurring calving of larger icebergs every decade or so.

Until recently, researchers thought that intense surface melt due to a warming climate and ice fracturing were the sole culprits. The new findings suggest that loss of sea ice and the calving of the seaward edge into narrow ‘sliver’ icebergs are the trigger that initiates a rapid ice shelf disintegration.

“It introduces ocean wave-induced breakage of the outer margins of ice shelves following loss of a protective sea ice buffer as the straw that breaks the camel’s back, triggering large-scale disintegration of ice shelves weakened by widespread melting and fracturing,” Massom said.

The researchers confirmed that atmospheric warming led to increased meltwater on the surfaces of the shelves. Pooled meltwater then percolated downward through crevasses, initiating a hydrofracturing process that weakened the ice.

But the team’s analysis revealed a previously under-appreciated link to sea ice: each disintegration occurred during periods with little or no sea ice cover along the ice shelf edge. Without the protective buffer of sea ice, the ice shelves became exposed to wave action that flexed the already fractured ice.

“What we’ve found is that increased flexing of the outer parts of ice shelves by waves sets the ice up for destruction. Even though the movement is tiny, over time the shelf is weakened,” Scambos said.

In each case, ocean swells began impacting the ice shelf edge. As the shelves flexed, pre-existing fractures along the seaward edge chipped off as long, thin, sliver-shaped icebergs instead of the larger tabular icebergs more typical of Antarctic ice shelf calvings. Rapidly losing swaths of the stabilizing keystone blocks from the seaward edge left the remaining ice shelf ripe for runaway collapse.

“Other ice shelves can survive for centuries if they don’t have surface meltwater—or if the water can run off easily,” Scambos said. The Nansen Ice Shelf, for instance, is less susceptible to hydrofracturing because a large drainage system helps funnel meltwater off the shelf surface. “But with meltwater ponding and a legacy of weakening from sea ice loss, you can destroy a shelf in just a few weeks,” Scambos said. “It starts with these keystone blocks being broken out.”

These shelves form a crucial interface between warming oceans and the massive Antarctic ice sheets flowing toward the coasts.

Because ice shelves are already floating in the ocean and displacing their volume, similar to ice cubes in a glass of water, they do not contribute directly to sea level rise when they break up or disintegrate.

Ice shelves do, however, provide a backpressure that moderates glacier flow speed. Once the ice shelves are gone, so is the backpressure, allowing the glaciers to flow more rapidly into the ocean. It is this land-based ice that ultimately contributes to sea level rise.

“We hope that our new findings will both increase awareness of the importance of interactions and linkages between different component parts of the global cryosphere, and also focus and motivate efforts to better understand and model the coupled ice sheet-sea ice-atmosphere-ocean system around Antarctica,” Massom said. “This represents an important pathway towards reducing current large uncertainty in predictions of the response of the Antarctic cryosphere to climate change and its contribution to sea level rise.”

The Antarctic Ice Sheet contains enough ice to raise sea level by approximately 57 meters (187 feet), about half the length of a football or soccer field. Worldwide, more than 100 million people currently live within one meter of mean sea level, making it critical for researchers to understand the fate of remaining ice shelves, to enable more accurate assessments of future Antarctic ice discharge into the ocean.

The National Snow and Ice Data Center (NSIDC) is part of the Cooperative Institute for Research in Environmental Sciences at the University of Colorado Boulder.