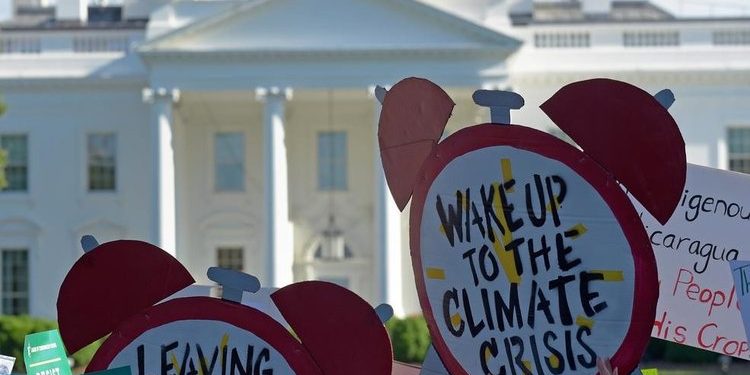 The United States Climate Alliance is a bipartisan group of U.S. states that have pledged to uphold the 2016 Paris Agreement on climate change within their borders. The goal of the Alliance is to reduce their carbon dioxide emissions 26-28 percent from 2005 levels by 2025 and to meet or exceed the targets of the U.S. Clean Power Plan (a 32 percent reduction of CO2 emissions by 2030), even if the plan is abandoned by the Trump Administration, as seems likely. These actions would help fulfill the global community’s goal, as set forth in the Paris Climate Agreement, to keep global warming below 2 degrees Celsius (3.6 degrees Fahrenheit).

The Alliance provides a forum for its members to further develop and strengthen their existing Climate Action Plans through the sharing of information and best practices. Alliance members currently consist of 13 states and one U.S. territory, making up 32.3 percent of the U.S. population (over 100 million Americans) and 37.7 percent of its GDP, as of 2016.

In addition to the Alliance, several city/county-led and private sector efforts are underway to address the goals of the Paris Agreement, in a concerted attempt to fill the void created by the withdrawal by the federal government.

Accession to the Alliance

In addition, the governors of Maryland, Montana, North Carolina, Ohio, Pennsylvania, New Mexico, Iowa, Illinois, and Maine and the Mayor of Washington, DC, have pledged their support for the Paris Agreement. Six of these governors are Republicans. The Democratic candidate in the 2017 New Jersey gubernatorial race, Phil Murphy, criticized President Trump’s decision and pledged to join the U.S. Climate Alliance if elected Governor of New Jersey.

On June 1, the National League of Cities (NLC), representing over 19,000 U.S. cities and towns, issued a strong condemnation of President Trump’s decision to withdraw the United States from the Paris Agreement. More than 70 local leaders signed onto NLC’s climate action letter to President Trump, urging the administration to embrace the principles of the Paris agreement. In addition, hundreds of mayors of U.S. cities and county executives have indicated support for the objectives of the Climate Alliance through the Mayors National Climate Action Agenda (MNCAA), an organization of U.S. mayors committed to upholding the Paris Agreement. Members of the MNCAA include Washington, DC, as well as the ten most populous cities in the nation: New York City, Los Angeles, Chicago, Houston, Phoenix, Philadelphia, San Antonio, San Diego, Dallas, and San Jose. The MNCAA, or Climate Mayors, currently represents 359 U.S. cities and 66 million Americans. The organization was founded in 2014 to support efforts to organize cities in advance of the signing of the 2015 Paris Agreement. Several non-member cities such as Nashville, Indianapolis, and Memphis have independently pledged to honor the Paris Agreement.

In late June 2017, the U.S. Conference of Mayors, which represents 1,481 cities, 148 million people, and 42 percent of the country’s electricity use, passed a resolution to make achieving 100 percent renewable power a top policy priority over the next decade.

On June 19, the Sierra Club published a report that outlined three potential scenarios by which the United States could meet its Paris Agreement pledge through actions taken by cities directly. That analysis is based on data from the National Renewable Energy Laboratory and the U.S. Energy Information Administration. The report further stated that:

• 36 cities have committed to transition to 100 percent renewable electricity by 2050 or sooner, some having already completed that goal;

• The mayors of 100 U.S. cities have pledged to transition to 100 percent renewable energy as they joined Mayors for 100 percent Clean Energy, a Sierra Club initiative; and

• The U.S. Conference of Mayors, the largest bipartisan organization of cities, was voting on a resolution (passed on June 26) to support the goal of 100 percent renewable energy in cities nationwide by 2035.

Actions by Other Groups and Individuals

On June 2, former New York City Mayor Michael Bloomberg pledged to donate $15 million to the UN Framework Convention on Climate Change (UNFCCC), to replace the funding removed by the Trump Administration’s withdrawal from the Paris Agreement. Following the Paris Agreement negotiations, the United States sent $1 billion to the Green Climate Fund, which is run by the UNFCCC to coordinate international climate policy. The United States had committed to provide an additional $2 billion to the Fund, but the new Administration’s 2018 budget calls for drastic cuts to international climate programs. Some states are considering legislation that would give taxpayers the option to send a portion of their tax rebates to the Green Climate Fund.

One member of the Climate Alliance, Hawaii, passed a law on June 6 formally committing the state to the Paris Agreement. California Governor Jerry Brown traveled to China in June where he attended meetings on climate change with leading Chinese and German officials, positioning himself as the de facto U.S. leader on international climate negotiations.

Also in June, a group of U.S. states, state attorneys general, cities, counties, businesses, and universities signed on to a coalition called “We Are Still In.” In an open letter to the international community, the coalition members pledged to continue to support climate action to meet the Paris Agreement. As of June 5, the group, initiated by Mayor Bloomberg, had signatories from 125 cities, nine states, 183 colleges and universities, and 902 businesses, and other entities are invited to join via the group’s website. The group represents 120 million Americans and $6.2 trillion in contributions to the U.S. economy.

In addition, several U.S. states and cities, along with many other subnational governments worldwide, have signed a memorandum of understanding (MOU) to achieve an 80- to 95-percent reduction in greenhouse gas emissions (compared to 1990 levels), and/or emit less than two metric tons of emissions per capita per year by 2050. The intent of the Under2 MOU signatories is to take actions to avoid a two-degree rise in average global temperatures, as surpassing that threshold could result in increasingly severe climate impacts.

In another related development, a coalition of 13 state attorneys general are suing the Trump Administration over its plans to eliminate vehicle emissions standards established under President Obama. Those rules would double average fuel efficiency by 2025, providing a significant contribution to the overall U.S. reduction in greenhouse gases.

If the United States follows through with its decision to formally withdraw from the Paris Agreement, which procedurally cannot happen until November 4, 2020, the country would join just two others — Syria and Nicaragua — as non-parties to the Agreement (Nicaragua did not sign on because the Agreement did not include strong enough pledges from rich countries, and Syria was unable to join because it is subject to international sanctions). Several analysts have argued that withdrawal from the Agreement threatens to make the United States an international pariah. It could also undermine international cooperation with our erstwhile allies on issues unrelated to climate change. Pundits argue that at a minimum, it would amount to ceding political, economic and moral influence internationally.

Meanwhile, state leaders are continuing to move forward with their carbon-cutting efforts independent of any actions at the federal level. Washington Governor Jay Inslee (D) said his efforts to promote a carbon tax were more dependent on budget negotiations than on the President’s decision on Paris. Colorado Governor John Hickenlooper (D) pledged to continue working with utilities to lower emissions while reaching out to Republican colleagues in other states to find ways to green the economy.

To facilitate all of the actions by cities, companies, universities and states to cooperate directly on reducing greenhouse gas emissions, the UNFCCC has set up a Non-State Actor Zone for Climate Action (NAZCA) portal, which recognizes the importance of sub-national actors in climate action. Thus far, NAZCA has obtained commitments to reduce greenhouse gas emissions from 2,508 cities, 209 regions, 2,138 companies, 479 investors, and 238 civil society organization around the world. Regarding these actions, Mayor Bloomberg stated that, “The American government may have pulled out of the Paris Agreement, but American society remains committed to it — and we will redouble our efforts to achieve its goals.” Others, however, are continuing to press the Trump Administration to reverse its position in order “to quantify, communicate and encourage climate action in the United States.” Without a federal mandate or funding for local energy-related actions, cities and states will differ widely on how they plan to implement and enforce their pledges, and they may lack the resources to follow through on their pledges.

This fact sheet is available electronically (with hyperlinks and endnotes) at http://ww.eesi.org/papers

The Environmental and Energy Study Institute (EESI) is a nonprofit dedicated to sharing information about energy efficiency, renewable energy, and other sustainable solutions. We highlight the need to take action against climate change, and emphasize that economic growth and environmental conservation can go hand-in-hand.