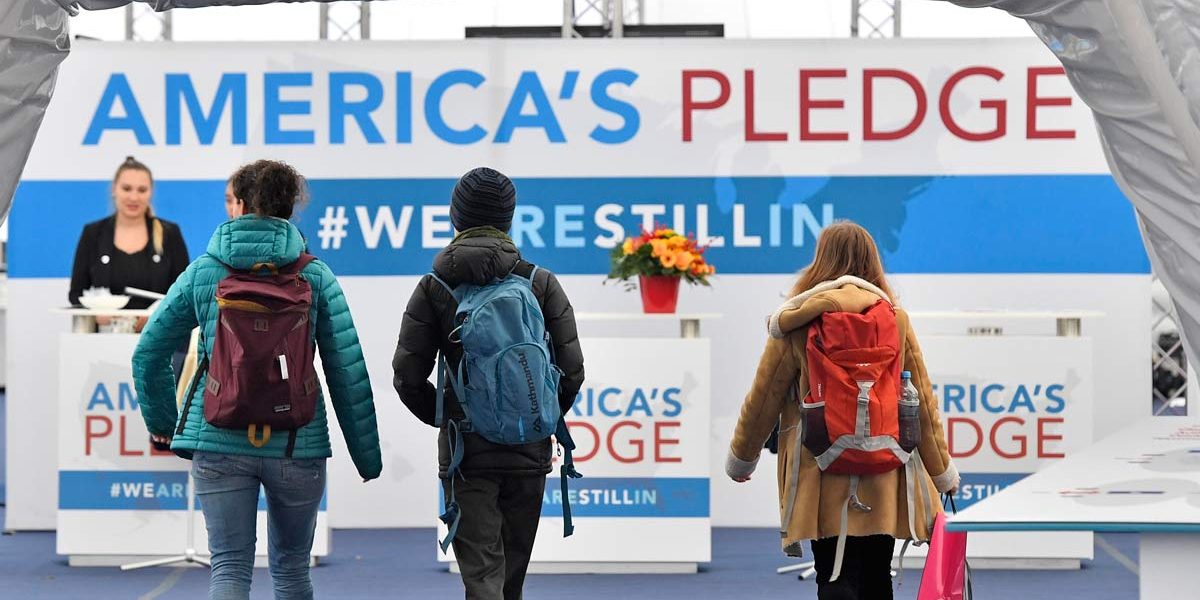 Initiative will compile and quantify efforts from U.S. states, cities, businesses and other actors to address climate change in alignment with the Paris Agreement

California Governor Jerry Brown and Michael Bloomberg have launched America’s Pledge on climate change, a new initiative to compile and quantify the actions of states, cities and businesses in the United States to drive down their greenhouse gas emissions consistent with the goals of the Paris Agreement.

“Today we’re sending a clear message to the world that America’s states, cities and businesses are moving forward with our country’s commitments under the Paris Agreement – with or without Washington,” said Governor Jerry Brown, who was recently named Special Advisor for States and Regions ahead of the United Nations’ 23rd Conference of the Parties to the Framework Convention on Climate Change (COP23).

Since the White House announcement of its intention to withdraw from the Paris Agreement, an unprecedented number of U.S. states, cities, businesses, and colleges and universities have reaffirmed their support for the Paris Agreement through collaborations including the “We Are Still In” declaration, the Climate Mayors coalition of cities, the U.S. Climate Alliance group of states, and others.

Building on this positive momentum, the America’s Pledge initiative will for the first time aggregate the commitments of these and other “non-Party actors” in a report on the full range of climate-related activities across the whole of U.S. society. The process of developing America’s Pledge will also provide a roadmap for increased climate ambition from U.S. states, cities, businesses and others, and will transparently demonstrate to the international community how and in which ways these entities can help the U.S. deliver on its pledge under the Paris Agreement.

“In the U.S., emission levels are determined far more by cities, states, and businesses than they are by our federal government – and each of these groups is taking action because it’s in their own best interest,” said Michael Bloomberg, the United Nations Secretary-General’s Special Envoy for Cities and Climate Change. “Reducing emissions is good for the economy and good for public health. The American government may have pulled out of the Paris Agreement, but American society remains committed to it – and we will redouble our efforts to achieve its goals. We’re already halfway there.”

In 2015, during the lead-up to the Paris conference on climate change, the U.S. submitted its “Nationally Determined Contribution” committing to reduce emissions 26-28% against 2005 levels by 2025. Last weekend, the G20 Leaders’ Declaration took note of the Trump Administration’s decision to withdraw from the Paris Agreement, confirming that “it will immediately cease the implementation of its current nationally-determined contribution” while underscoring that “the Leaders of the other G20 members state that the Paris Agreement is irreversible.” Through the America’s Pledge initiative, Brown and Bloomberg will work to demonstrate continued climate leadership across U.S. society, and that subnational action can significantly reduce U.S. greenhouse gas emissions at a time of limited federal leadership.

Commissioned by Brown and Bloomberg, the Rocky Mountain Institute and the World Resources Institute will jointly lead an inclusive analytical effort supporting America’s Pledge, with involvement by a broad set of stakeholders to be announced later this year. In November, Brown and Bloomberg, along with other U.S. governors, mayors, and business leaders, will compile and showcase existing climate commitments of U.S. subnational and non-state actors at COP23, to be hosted by the Government of Fiji in Bonn, Germany.

In addition, the America’s Pledge initiative will work to quantify the aggregate impact of these commitments on projected future emissions, comparing against both a business-as-usual (BAU) trajectory of projected greenhouse gas emissions under likely Trump Administration policies, and the U.S. Nationally Determined Contribution of 26-28% reductions against a 2005 baseline by 2025.

Finally, the America’s Pledge initiative will present a game plan for raising the bar and expanding the map when it comes to non-Party actors driving down U.S. emissions. This set of options, which will highlight the significant levers available to states, cities, and businesses to further reduce U.S. emissions, will serve as a playbook for enhanced ambition among U.S. climate leaders who are committed to meeting America’s commitments under the Paris Agreement.

“I am convinced that to be effective, action to address climate change must be taken at all levels of society, including by mayors, governors, local leaders, chief executive officers and others,” said United Nations Secretary-General António Guterres. “This is demonstrably not an issue that can be addressed by national governments alone. The effort to aggregate and quantify the actions of subnational authorities and non-Party stakeholders in the United States via ‘America’s Pledge’ is welcome.”

Organizations that would like to become involved in America’s Pledge can visit http://www.americaspledgeonclimate.com.