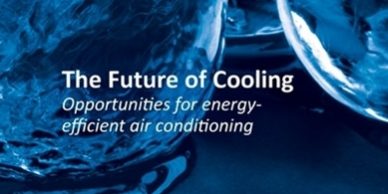 The growing use of air conditioners in homes and offices around the world will be one of the top drivers of global electricity demand over the next three decades, according to new analysis by the International Energy Agency that stresses the urgent need for policy action to improve cooling efficiency.

A new IEA report – “The Future of Cooling” – shows that without new efficiency standards the world will be facing a “cold crunch” from the growth in cooling demand in coming decades.

Global energy demand from air conditioners is expected to triple by 2050, requiring new electricity capacity the equivalent to the combined electricity capacity of the United States, the EU and Japan today. The global stock of air conditioners in buildings will grow to 5.6 billion by 2050, up from 1.6 billion today – which amounts to 10 new ACs sold every second for the next 30 years, according to the report.

Using air conditioners and electric fans to stay cool already accounts for about a fifth of the total electricity used in buildings around the world – or 10% of all global electricity consumption today. But as incomes and living standards improve in many developing countries, the growth in AC demand in hotter regions is set to soar. AC use is expected to be the second-largest source of global electricity demand growth after the industry sector, and the strongest driver for buildings by 2050.

Supplying power to these ACs comes with large costs and environmental implications. One crucial factor is that the efficiency of these new ACs can vary widely. For example, ACs sold in Japan and the European Union are typically 25% more efficient than those sold in the United States and China. Efficiency improvements could cut the energy growth from AC demand in half through mandatory energy performance standards.

“Growing electricity demand for air conditioning is one of the most critical blind spots in today’s energy debate,” said Dr Fatih Birol, the Executive Director of the IEA. “With rising incomes, air conditioner ownership will skyrocket, especially in the emerging world. While this will bring extra comfort and improve daily lives, it is essential that efficiency performance for ACs be prioritized. Standards for the bulk of these new ACs are much lower than where they should be.”

The report identifies key policy actions. In an Efficient Cooling Scenario, which is compatible with the goals of the Paris Agreement, the IEA finds that through stringent minimum energy performance standards and other measures such as labelling, the average energy efficiency of the stock of ACs worldwide could more than double between now and 2050. This would greatly reduce the need to build new electricity infrastructure to meet rising demand.

The rise in cooling demand will be particularly important in the hotter regions of the world.

Today, less than a third of global households own an air conditioner. In countries such as the United States and Japan, more than 90% of households have air conditioning, compared to just 8% of the 2.8 billion people living in the hottest parts of the world.

The issue is particularly sensitive in the fastest-growing nations, with the biggest increase happening in hot countries like India – where the share of AC in peak electricity load could reach 45% in 2050, up from 10% today without action. This will require large investments in new power plants to meet peak power demand at night, which cannot be met with solar PV technology.

“Setting higher efficiency standards for cooling is one of the easiest steps governments can take to reduce the need for new power plants, and allow them at the same time to cut emissions and reduce costs,” said Dr Birol.

“The Future of Cooling” is the second IEA report that focuses on “blind spots” of the global energy system, following the “The Future of Trucks,” which was released in July 2017. The next one in this series – “The Future of Petro-Chemicals” – will examine ways to build a more sustainable petrochemical industry. It will be released in September.