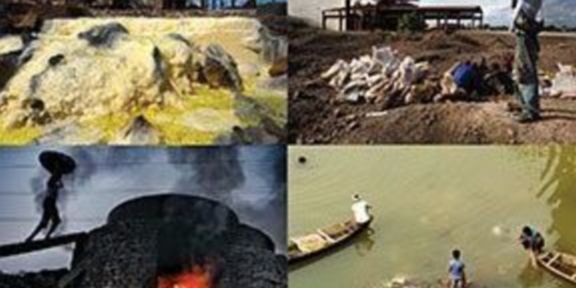 • Almost all pollution-related deaths (92%) occur in low- and middle-income countries, and in rapidly industrializing countries (such as India, Pakistan, China, Bangladesh, Madagascar and Kenya), deaths due to pollution can account for up to one in four deaths.

• Welfare losses due to pollution are estimated to cost more than US$4.6 trillion each year, equivalent to 6.2% of global economic output.

• With many emerging chemical pollutants still to be identified, these figures are likely to underestimate the true burden of pollution-related disease and death.

Pollution is linked to an estimated nine million deaths each year worldwide – equivalent to one in six (16%) of all deaths, according to a major new report in The Lancet. Most of these deaths are due to non-communicable diseases caused by pollution such as heart disease, stroke, lung cancer and chronic obstructive pulmonary disease (COPD).

The report finds that pollution as a result of outdoor and indoor air pollution, water and soil contamination, and chemical pollutants is one of the largest risk factors for premature death. With almost all of these deaths (92%) occurring in low- and middle-income countries, and pollution disproportionately affecting the poor and marginalized in every country worldwide, the authors of the report aim to end neglect of the issue across the political spectrum, and mobilize the will, resources, and the leadership needed to confront it.

The Lancet Commission on Pollution and Health is a two-year project that has involved more than 40 international health and environmental authors. Using data from the Global Burden of Disease study, it brings together comprehensive estimates on the effects of pollution on health, provides economic costs, and reveals the extent of contaminated sites across the world for the first time.

“Pollution is much more than an environmental challenge – it is a profound and pervasive threat that affects many aspects of human health and wellbeing. It deserves the full attention of international leaders, civil society, health professionals, and people around the world,” says Commission co-lead, Professor Philip Landrigan, Icahn School of Medicine at Mount Sinai, USA. “Despite its far-reaching effects on health, the economy and the environment, pollution has been neglected in the international assistance and the global health agendas, and some control strategies have been deeply underfunded. Our goal is to raise global awareness of the importance of pollution, and mobilize the political will needed to tackle it, by providing the most in-depth estimates of pollution and health available.” [1]

The study found that the largest contributor to pollution-related deaths is air pollution (including ambient air pollution which is outdoor air pollution comprised of gases and particulate matter; and household air pollution that results from the burning of wood, charcoal, coal, dung, or crop wastes indoors; and ambient ozone), linked to an estimated 6.5 million deaths in 2015 as a result of diseases such as heart disease, stroke, lung cancer, and COPD.

The next largest risk factor was water pollution such as unsafe sanitation and polluted water sources, which are linked to 1.8 million deaths as a result of gastrointestinal diseases and parasitic infections.

Workplace pollution including exposure to toxins and carcinogens was linked to 0.8 million deaths from diseases such as such pneumoconiosis in coal workers, bladder cancer in dye workers, and asbestosis, lung cancer, mesothelioma, and other cancers in workers exposed to asbestos.

Finally, lead pollution was linked to 0.5 million deaths that resulted from high blood pressure, renal failure, and cardiovascular disease caused by lead in adults. Additional health effects caused by other forms of soil pollution (such as other heavy metals or chemicals) are not adequately researched, and so are not included in the study.

With many more chemical pollutants still to be identified and studied, the authors note that their figures are likely to underestimate the full health effects of pollution.

While almost all (92%) pollution-related deaths occur in low- and middle-income countries, the greatest impacts occur in countries that are currently undergoing rapid development and industrialization – with pollution responsible for up to one in four deaths in the most severely affected countries (such as in India, Pakistan, China, Bangladesh, Madagascar and Kenya – full country-level data available at end of press release).

In 2015, the greatest numbers of deaths due to pollution occurred in India (2.5 million deaths) and China (1.8 million).

However, types of pollution associated with industrial development, such as ambient air pollution (including ozone), chemical, occupational pollution and soil pollution, have increased from 4.3 million (9.2%) in 1990 to 5.5 million (10.2%) in 2015 as countries reach higher levels of development.

Despite this, the authors argue that pollution is not the inevitable consequence of economic development, and applying similar legislation and regulation from high-income countries to low- and middle-income countries could help to improve and protect health as countries develop.

As the report does not include costs related to the environmental damage inflicted by pollution, the authors note that these are not the full costs of pollution.

The effects of pollution disproportionately affect the poor and marginalized in countries at every level of income as they are more often exposed to toxic chemicals via contaminated air and water, unsafe workplaces, and other pollution-generating sources within close proximity to their homes. The authors argue that environmental injustice often violates these people’s human rights and cite global examples – ranging from Roma people being placed in refugee camps in an area polluted by toxic remains from a lead mine in Kosovo, to higher levels of ambient air pollution in disadvantaged areas of New York due to high numbers of local bus depots.

“Pollution, poverty, poor health, and social injustice are deeply intertwined. Pollution and related diseases most often affect the world’s poor and powerless, and victims are often the vulnerable and the voiceless. As a result, pollution threatens fundamental human rights, such as the right to life, health, wellbeing, safe work, as well as protections of children and the most vulnerable.” Says Commission author Karti Sandilya, Pure Earth, USA. [1]

“In order to tackle pollution, we must prioritise it as an issue that affects us all, integrating it into health planning, and increasing funding to allow more research into pollution, such as monitoring pollution and its effects, and developing ways to control pollution,” says Commission co-lead, Richard Fuller, Pure Earth, USA. “Pollution can be eliminated, and pollution prevention can be highly cost-effective – helping to improve health and extend lifespan, while boosting the economy. This has been seen in high-income and some middle-income countries where legislation has helped to curb the most flagrant forms of pollution, and has led to cleaner air and water, lower blood lead concentrations, removal of hazardous waste sites, and less polluted and more liveable cities.” [1]

Writing in a linked Comment, Dr Pamela Das, Senior Executive Editor, and Dr Richard Horton, editor-in-chief of The Lancet say: “As the report shows, no country is unaffected by pollution. Human activities, including industrialization, urbanization, and globalization, are all drivers of pollution… We hope that the findings and recommendations from this Lancet Commission will also marshal action in the health and development sectors, and persuade leaders at the national, state, provincial, and city levels to make pollution a priority. Although there is some activity on pollution internationally, much more is needed… This Lancet Commission should inform policy makers and serve as a timely call to action. Pollution is a winnable battle.”

The Commission was funded by European Union, UN Industrial Development Organization, the Swedish Ministry of Environment and Energy, the German Federal Ministry for the Environment, Nature Conservation, Building and Nuclear Safety, Royal Norwegian Ministry of Health and Care Services, the US Agency for International Development, the US National Institute of Environmental Health Sciences, the Icahn School of Medicine at Mount Sinai, and Pure Earth.

[1] Quote direct from author and cannot be found in the text of the Article.